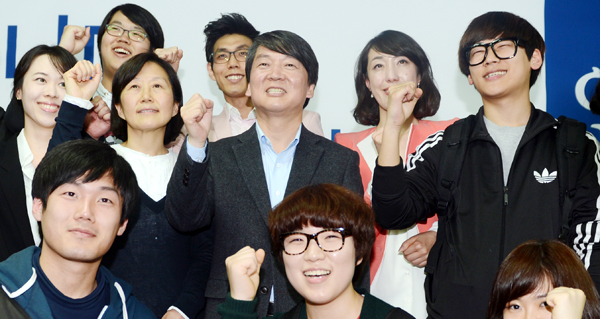 Now that liberal superstar Ahn Cheol-soo is an elected politician, expectations are rising that he will shake up the political landscape of the left, particularly affecting the faction-ridden opposition Democratic United Party.

Ahn, a former independent candidate who withdrew in disgust from the December presidential election after being outmaneuvered by the DUP’s candidate, won Wednesday’s National Assembly by-election in northeastern Seoul’s Nowon C District, beating ruling Saenuri Party rival Huh Joon-young by a large margin without help from any political party.

“I will reward [your support] with good politics,” Ahn said in a speech at a press meeting after the outcome was announced Wednesday night. “Please keep your eyes on the new start of Ahn Cheol-soo.”

When asked if he has plans to create a new political party of his own, Ahn said, “I will let you know of my future plans after other things are wrapped up.”

A close aide to Ahn told the JoongAng Ilbo Wednesday, “There is no specific conclusion yet in regards to a new party.” Ahn, he said, “will have to consider whether embracing lawmakers who defect from another political party is suitable for his ‘new politics.’?”

Ahn toured the Nowon District yesterday including a shantytown and subway stations and expressed gratitude to local residents for their support.

He told reporters that his promise of “new politics” was not a vague notion in the least.

“[The slogan of] new politics is not ambiguous,” Ahn said. “It’s those who don’t want [new politics] that are saying that it’s ambiguous.

The DUP released a congratulatory message Wednesday saying it desired “harmony” with Ahn, not “division.”

Asked about the DUP, Ahn said all political parties “would benefit if they competed with each other to earn public support for new politics.

“So far, politicians have ‘opposed for the sake of opposing,’?” he said. “People want us to cooperate with each other.”

When asked if he got any phone calls or text messages from the DUP or from Seoul Mayor Park Won-soon, Ahn said he had not.

Moon Jae-in, the DUP presidential candidate who outmaneuvered Ahn in negotiations to merge their candidacies last year, congratulated him yesterday via local media.

But Moon didn’t respond when asked if he has any plans to meet with Ahn.

The DUP is most worried about the idea of Ahn creating his own party.

According to a poll by Gallup Korea on March 8, 23 percent of respondents said they would support Ahn’s party if he forms one, twice that of the DUP’s approval rating of 11 percent. The Saenuri recorded 37 percent.

Support for a party founded by Ahn was also high in the Jeolla region, a DUP stronghold.

According to a poll by the Hankyoreh newspaper and the Korea Society Opinion Institute on March 2, Ahn’s party would receive an approval rating of 24.7 percent, close to that of the DUP at 24.2 percent.

A DUP lawmaker told the JoongAng Ilbo on the condition of anonymity that some DUP members could defect to Ahn’s new party.

“Once we see defectors [to Ahn’s party], it would deal a blow to the DUP’s procedure for reform,” he said.

Another senior DUP lawmaker said the DUP and any party started by Ahn should be merged.

“At this moment, there would be no DUP lawmakers defecting to Ahn’s party,” the lawmaker said. “We should maintain the two-track strategy - attracting supporters by coexisting with Ahn’s party. After that, if we merged for the next election, we would be able to beat out the ruling party.”

A DUP leadership election is scheduled for May 4, and it is expected to result in a new power elite. Three DUP lawmakers are running for party leadership: Kim Han-gill, Lee Yong-sup and Kang Gi-jung. All have said they favor Ahn joining the DUP.

And all three candidates expressed opposition to the possibility of Ahn forming a new party.

Political analysts say a party formed by Ahn would threaten the very existence of the DUP, which is still suffering from factional fighting between loyalists of former President Roh Moo-hyun and of former President Kim Dae-jung. Each faction blames the other for the loss of the presidency in December.