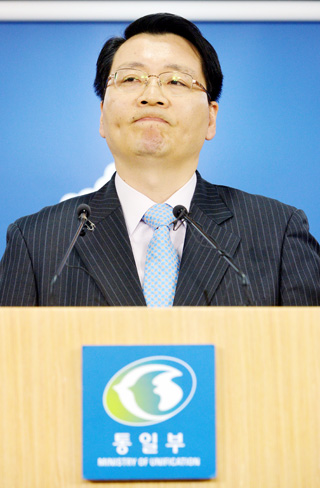 Kim Hyung-suk, spokesman for the Unification Ministry, makes a proposal to Pyongyang yesterday to hold working-level talks over the Kaesong Industrial Complex. [NEWSIS]

South Korea proposed a dialogue to North Korea to restart operations at the Kaesong Industrial Complex and warned of a “grave measure” if Pyongyang didn’t answer its request.

The Unification Ministry, which is in charge of inter-Korean business, released a statement yesterday urging a working-level meeting to reopen the Kaesong Industrial Complex, which has been suspended for more than three weeks.

“Our government officially proposes an inter-Korean working-level meeting for normalization of the Kaesong Industrial Complex and for resolving the humanitarian issues of the workers [remaining in the complex],” Kim Hyung-suk, spokesman of the ministry, said yesterday at a daily briefing. “We want Pyongyang to respond to this proposal before tomorrow morning [April 26].

“The government hasn’t changed its firm position on stable management and development of the Kaesong complex,” the statement continued, “but if North Korea refuses this proposal, we can’t help but take a grave measure.”

When reporters asked what “the grave measure” was, Kim refused a clear answer, saying “there could be various, predictable situations if the North turns it down.” Asked if a shutdown of the complex was an option, Kim didn’t deny it. It was unusual for the South Korean government to take such a strong stance in proposing talks.

As of 8 p.m. yesterday, Pyongyang didn’t respond to the proposal, according to the ministry.

Pyongyang imposed an entry ban on all materials or people at the complex on April 3 and pulled out its 50,000 workers. A total of 175 South Korean workers are staying in the zone in a desperate move to keep running the factories owned by 123 South Korean firms.

Kim said in the statement it was “very regrettable” that Pyongyang ignores “basic humanitarian requests” from South Korean workers in the complex, referring to requests for medicine and food.

North Korea has refused all requests from the South Korean businessmen for resumption of operations. The remaining workers are said to be struggling with a shortage of food, medicine and materials. All doctors and nurses left the zone.

“The workers are about to die of starvation,” a Blue House official told the JoongAng Ilbo on the condition of anonymity. “They will run out of food at the end of April. It’s a humanitarian issue.”

On April 11, Unification Minister Ryoo Kihl-jae said in a statement that the matter of the complex should be “resolved through dialogue” and urged Pyongyang “to come to the table for talks.”

Pyongyang rebuffed the proposal calling it “a despicable trick.”

President Park Geun-hye said Wednesday she hopes the matter of the complex will “be resolved immediately” because the complex is “a litmus test to see whether trust-building between the two Koreas is still possible.”

Still, Park said that “pumping aid [into North Korea] without any principle or going easy on a negotiation would never be possible for the new administration, unlike in the past.”

“The working-level talks will deal with the matter of the Kaesong complex only,” Kim told the Korea JoongAng Daily. “It doesn’t mean that the government decided to offer aid to Pyongyang.”

The amount of losses by South Korean firms was not officially estimated, according to the ministry, but private analysts said they could reach up to 6 trillion won ($5.4 billion) in total. North Korea didn’t hold any events to mark the anniversary of the founding of its army yesterday, according to the South’s Defense Ministry. Previously, the regime held large military parades on that day.