Drunk woman blinded in an eye by police Taser

Drunk woman blinded in an eye by police Taser 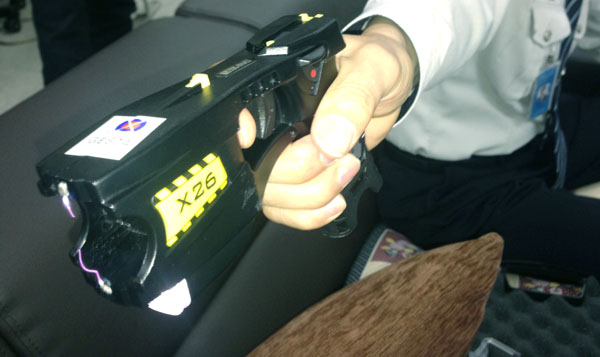 A Daegu police officer shows a Taser gun of the sort that was used in the incident outside a local restaurant early Wednesday in Dalseo District, Daegu. [NEWSIS]

DAEGU - The local police are under fire for using excessive force to control a woman who was drunk at a restaurant.

The woman is now permanently blind in her left eye after a police officer Tased her face. The officer said it was an accident, but the woman claims otherwise.

At 2:28 a.m. Wednesday, the Dalseo Police Precinct received a call from the owner of a restaurant in Dalseo District, Daegu, saying a drunken couple was creating a disturbance. Two police officers, including a 51-year-old officer surnamed Park, were dispatched to the scene.

In front of the restaurant, a 34-year-old woman surnamed Kang was fighting with her husband. She was wielding a large set of tongs used to straighten up customers’ shoes. Her husband was waving a beer bottle.

The couple had drunk two bottles of beer and a bottle of soju together.

The police officers ordered the husband inside the restaurant. But the wife started yelling at them, “Why do you care?”

The officers pushed Kang onto the ground in order to handcuff her hands, but she resisted. In the tussle, a Taser held by officer Park discharged at her face and two needles got stuck in Kang’s left eye and nose.

A Taser, which is 15.3 centimeters (6.02 inches) long, is a tool that police use in handling violent individuals that fires two needles in a single shot connected to wires that deliver charges of 50,000 volts. The gun’s effective range is about five to seven meters. It paralyzes a person’s muscles temporarily.

“As Kang acted too violently, we pulled out our Taser and the safety was released,” Park explained. “But it was fired by mistake when we tussled with the woman.”

Kang recalls differently. She insists that Park took her down on the ground after she refused to be handcuffed. She said the police Tased her on the waist one time and then fired again after saying, “Look at this woman.”

“I’m not a robber or a rapist, but a housewife, but two police officers sprang at me with a Taser,” Kang said. “They twisted my arm and handcuffed me and then forced me to stay in that posture for a long time although one of the needles was stuck in my eye.”

The police said Tasers do no permanent harm, but there are opinions they can blind. In July 2009, a member of the Ssangyong Motor labor union was shot in the cheek at a rally. According to the police code of conduct in criminal cases, police officers are ordered to use a Taser like an electric stun gun when a criminal is at close range.