Dash to Taepyeong to spice up your weekend

Dash to Taepyeong to spice up your weekend 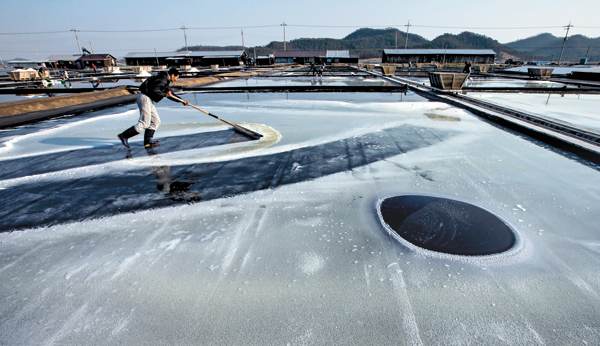 The Taepyeong Salt Field in Sinan County, South Jeolla, was built in 1953 by the Syngman Rhee administration to provide jobs to those who escaped from North Korea after the breakout of the 1950-53 Korean War.

Having grown into the country’s biggest salt field, the industrial site is also promoting itself as an attractive destination for weekenders. It is located on Jeung Island, the first Slow City-designated site in Asia, and many salt-themed tourist packages such as salt field sightseeing, salt making, salt cave adventures and a salt plant botanical garden are luring in urban-dwellers from many parts of the country. 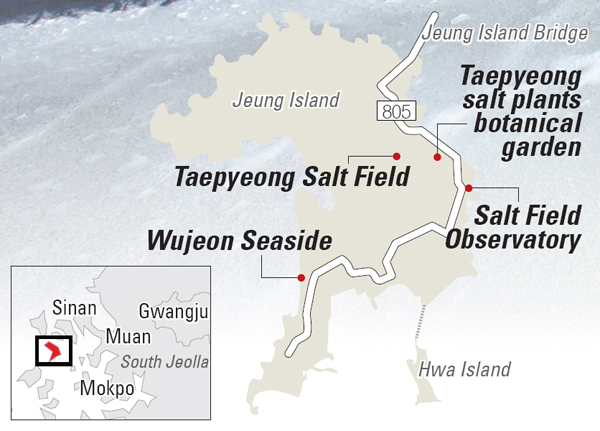 It is a good place to visit in the spring, when the first sun-dried salt is produced.

Built between Jeon (Front) Jeung Island and Hu (Rear) Jeung Island, the field is 4.62 square meters (50 square feet), twice the size of Yeouido in western Seoul. A total of 16,000 tons of sun-dried salt, or 5,700 burlap bags that weigh 30 kilograms (66 pounds) each, are produced from the salt field every year.

Sun-dried salt is produced on mud flats, so the minerals contained in the mud are melted into the salt. Korean salt is valued for its magnesium, and the unique minerals earned the area the label of biosphere preservation zone from Unesco in May 2009.

The minerals weren’t always so valued. There was a time when the Korean government classified them as inedible resources, dealing a serious blow to the sun-dried salt industry in the region. 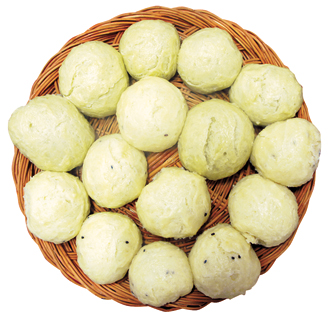 It was only five years ago when the government endorsed the salt as food that it regained its market value. Now, some of those working in the Taepyeong Salt Field have grown concerned about new challenges, such as radioactive leaks from the nuclear reactor in Fukushima, Japan, during the March 11, 2011 earthquake, as well as growing health worries about excessive salt intake.

“We are doing more cesium tests after the nuclear reactor accident than we did before,” Cho said. “Jeung Island is really good at self-purification, so we have had no problems so far.”

Regarding the salty diet concern, he said, “It is only regarding refined salts, which is a chunk of sodium chloride.”

The salt field churns out product between March and October, but there is plenty of work to do all year.

Like rice farming, salt farming requires the cultivation of the land every year. 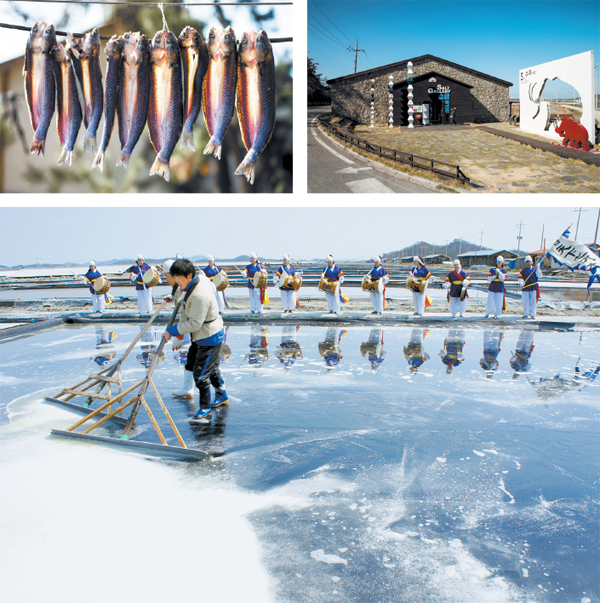 From top left: Dried mullet, a Jeung Island delicacy, is hung on a cable; the Salt Museum on Jeung Island provides visitors with plenty of information; salt masters compete on March 28.

The salt masters pump the seawater locked in reservoirs to a place where they initiate a multi-stage evaporation process. The evaporation work had been done manually until electricity was introduced on the island in 1980.

It takes around 20 days to see salt form in the water in Taepyeong, seven or eight times slower than other fields, but the resulting product is only a third of the average.

The first salt of the year is the highest in quality - some call it “Flower Salt.” The first harvest last month marked the 60th anniversary of the salt field.

The owners and workers gather on that day for a festival-like ceremony. Salt masters do a blind test, some with their tongues and others simply with their fingers.

“The older you let sun-dried salt get, the harder it becomes,” said Lim Jeong-muk, a second-generation salt master.

Taepyeong Salt Field on Jeung Island in Sinan County, South Jeolla, is the largest in Korea.

The first ceremony included a competition among the masters, with the first person to collect a basketful declared the winner. The top prize was a roasted pig hung upside down from a bar.

And when the winner was finally announced, the women in the village played traditional instruments and the announcer yelled, “Here comes the winner! It is the first salt of 2013!” The crowd responded with cheers.

The island is a five-hour drive from Seoul. The Taepyeong Salt Field also runs a salt museum, salt healing cave, salt plant botanical garden and salt stores - all in one place. Those interested can make reservations for a trip to the salt fields and related tourist programs at www.saltmuseum.org.