Lawmaker has ‘online chaebol’ in his sights

Lawmaker has ‘online chaebol’ in his sights 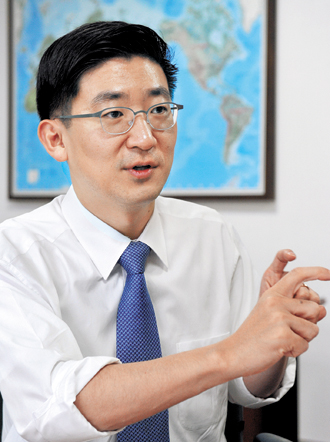 Kim Se-yeon, a second-time lawmaker with the ruling Saenuri Party, is son of the former lawmaker Kim Jin-jae, who served with the same party for five terms. As executive secretary of the discussion group on economic democratization at the National Assembly, the junior Kim, who represents Geumjeong District, Busan, has recently embarked on a project: economic democratization of web portals in Korea.

As an initial step, the lawmaker hosted a forum under the theme “The problems with large portals’ unfair transactions” on Tuesday. The first meeting dealt with the real estate information that Naver, the nation’s top portal site, offers. The discussion group said that ever since Naver launched its service in 2006, sales revenue at other online real estate information providers has tumbled 80 percent. At future forums, he intends to deal with digital music source distribution and game services at Naver, which account for almost half of the market share in Korea.

“As economic democratization is aimed at preventing chaebol from oppressing smaller companies in the real economy, a similar move in the online society is necessary,” he said in an interview.

“It is undesirable that there continue to be discussions denying the necessity of economic democratization,” he said last week.

He said there is circumstantial evidence that large portals are acting unfairly just as “offline chaebol” have done. He added that portals are a crucial part of the so-called “creative economy,” one of catchphrases of the Park Geun-hye administration, but that structural problems should be resolved as soon as possible to prevent problems from worsening.

Kim’s group plans to look into various fields in cyberspace ranging from gaming to music, online shopping and securities transactions. Since portals have gone beyond the personal computer to mobile phones, the group also needs to consider the connection with mobile carriers, Kim said. The inquiry may expand to the media, too, he added, including the relationship between content producers and distributors.

“Personally, I think it is more important to improve the industry structurally rather than impose regulations,” he said. “Under the market economy, some portals may become dominant players, but if they cannot restrain themselves, fair trade law should inevitably apply.”