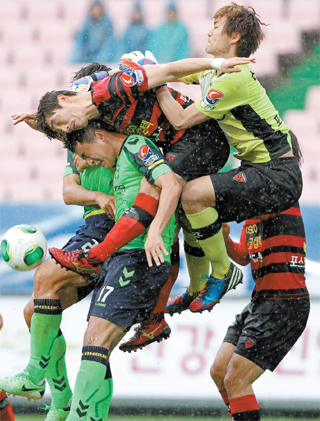 Jeonbuk Motors and Pohang Steelers players vie for the ball during a K-League Classic match at Jeonju World Cup Stadium on Saturday. The game ended in a 1-1 draw. By Lim Hyun-dong

Ko Yo-han scored twice and set up another goal, giving the defending champions their second victory of the season.

Partrik Camilo Cornelio gave the visitors a 1-0 lead in the sixth minute and extended their lead on an own goal by Seoul defender Adilson Dos Santos in the 38th minute.

Gangwon was getting closer to its first victory of the season, but Ko revived Seoul’s hopes in the 79th minute as he scored on an assist from Mauricio Alejandro Molina Uribe. Ko stormed back with an equalizer six minutes later, helped by Dejan Damjanovic. The Montenegrin striker then scored his own goal on Ko’s assist in the 87th minute.

The victory, which followed a 4-0 thrashing at Daegu FC, moved Seoul up to ninth place with 10 points.

Meanwhile, Incheon United earned a point with an 84th-minute equalizer by Moon Sang-yun as they drew, 2-2, with Ulsan Hyundai at Munsu World Cup Stadium in Ulsan yesterday.

Kim Shin-wook scored two goals in the space of nine minutes starting with a 61st-minute header. Thiago scored the first equalizer for Incheon in the 67th minute on Lee Chun-soo’s assist, the second assist in two games by the World Cup star. Thiago set up for Moon, helping Incheon secure a third-place position in the 14-team league. Ulsan is one point behind in fourth place.

The Busan I’Park drew with the Daejeon Citizen, 1-1, at the Busan Main Asiad Stadium yesterday.

Kim Bung-suk scored first for Daejeon in the 10th minute, then Rodrigo Leandro Da Costa responded on a penalty shot in the 45th minute. Busan, with 13 points, is in sixth place, while Daejeon is in 12th.

The league-leading Pohang Steelers extended their undefeated run to nine games, as they were held to a 1-1 draw by the Jeonbuk Motors on Saturday.

Ko Mu-yeol put the Steelers on the scoreboard with a 11th-minute header. Lee Dong-gook scored an equalizer in the 71st minute on an Enio Oliveira Junior cross. It was the Brazilian midfielder’s 60th cross, which made him only the second player to reach a double sixty mark - 60 goals and 60 assists - after Shin Tae-yong.

Junior was not impressed by his own record.

“Since I came to Korea first, setting the records has not been on my mind,” he said. “I don’t feel any different about the 60th assist.”

Elsewhere on Saturday, Daegu FC drew with Jeju United, 1-1 and Seongnam Chunma had a scoreless draw with the Chunnam Dragons.