What is traditional Korean beauty?

Some scholars have defined traditional Korean aesthetics as those which emphasize subtleness and modesty, rather than being loud and flamboyant. For those reasons, some have nicknamed ancient Korean art as “Art of Purity” or “Art of Space,” referring to its respect of simplicity and minimalism. Major examples included the white porcelain of the Joseon Dynasty (1392-1910).

But that’s not all traditional Korean beauty has to offer, others argue.

It also had “magnificence” and “splendor” as attested through various relics from hundreds of years ago that used fine materials like gold, silver, jade, crystal and glass. Through exquisite and elaborate craftsmanship, they became royal crowns, accessories, Buddhist statues, Buddhist paintings, and ceramics.

The best of the best traditional Korean craftwork that is anything but subtle and modest can be seen at the ongoing exhibition at Leeum, Samsung Museum of Art in Hannam-dong, Yongsan, in central Seoul. The exhibition is titled “Opulence: Treasures of Korean Traditional Craft” and showcases some 65 relics, including nine state-designated national treasures and 14 treasures.

It’s most striking that life has gotten smarter and technology has made remarkable strides with the invention of robots and people traveling to the moon.

But the curators of the museum say it’s impossible to recreate such eloquent, detailed craftwork today, adding that some of the techniques remain a mystery.

Craftsmanship that cannot be seen today 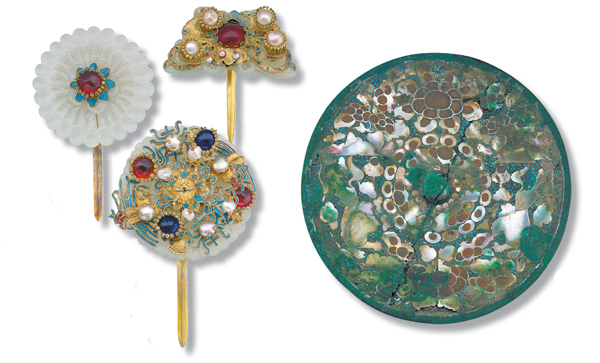 “There have been exhibitions on Korean craftwork before, but none really showed just why they are so fine,” Jo Ji-yoon, the curator of the museum, said standing next to the 12-century gilt silver ewer and basin, a collection on loan from the Museum of Fine Arts, Boston.

“As you can see here, the ewer is bamboo-shaped on the body, flower-shaped in the upper part and phoenix-shaped on the very top. The details are alive,” Jo said.

He showed the ewer - thought to be the only existing gilt silver ewer of the Goryeo Dynasty (918-1392) - through technology that allows people to zoom in and turn it around on a larger screen to see the amazing, painstaking detail that went into creating it.

Jo went on to show a first-century gold and turquoise buckle; a pair of fifth- to sixth-century gold earrings; and a 12th-century knife sheath and bracelet, which all have multitudes of extremely minute gold balls decorating the surface that portray dragons, flowers and fruits. “It’s still unknown how the artisans glued these tiny balls to the surface,” he explained.

Perhaps many visitors will go “Ah, I’ve seen this,” when they come across the fifth-century Silla gold crown and the fifth- to sixth-century Gaya gold crown. They are juxtaposed to contrast their size and aesthetics. Silla (57 BC-AD 935) was one of the three kingdoms during the Three Kingdoms era (57 BC-AD 668), while Gaya was the confederacy of territories in southern Korea between the first and sixth centuries. 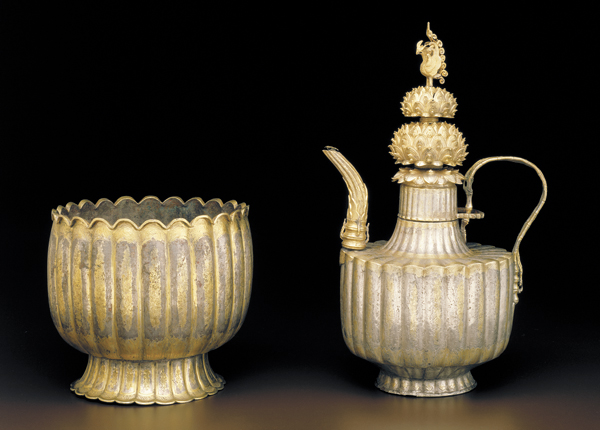 12th-century gilt silver ewer and basin Provided by the museum

The exhibition consists of four parts: In the first, “Luminous Symbols of Power,” the highlight is gold artifacts from the Silla and Goryeo dynasties (1 BC-AD 1392). The artifacts mentioned above are from the first part.

The second part, “Shining Light of Buddhism,” showcases Buddhist artifacts. The third, “The Most Precious Materials,” highlights the usage of various gems.

It is notable how the second part is displayed in an atmosphere similar to the Silla-era Seokguram Grotto, an artificial stone cave that contains Buddha’s statues and rock art. The grotto is also a state-designated national treasure and Unesco World Cultural Heritage Site.

The artifacts from the final years of the Joseon Dynasty are the highlights from the third part, while the gold-inlaid Goryeo celadon was a rarity in the fourth part.

Yanagi Muneyoshi (1889-1961), a Japanese aesthetics scholar who was known to be fond of Korean art, defined it by its simplicity. He dubbed Korean art as “Technique of No Technique,” “Personality of No Personality,” “Beauty of Grief,” and “Beauty of Lines.”

While the National Museum of Contemporary Art, Korea, is planning a special exhibition dedicated to Muneyoshi next month, there is also a scholarly debate about whether he really was as “pro-Korean” as he has widely been known.

In December, a book called “Yanagi Muneyoshi and Korea” was released, which includes a theory that his philosophy on Korean art helped Japan justify its 1910-45 colonization of Korea. For instance, poet Choi Ha-rim (1939-2010) argued that “Yanagi had affection for Joseon and Joseon’s craftwork, but no ideology used that affection in a right way.”

But other experts say Korean art and craftwork was colorful and luxurious.

Yang Eui-sook, a passionate collector, broker and appraiser of antiques for 40 years whose area of specialty is folk art, told the Korea JoongAng Daily that she would like to correct the saying that Koreans traditionally were “white-clad folks,” referring to how they all wore white clothes.

Instead, she clarifies, Koreans were “color-clad folks,” as evidenced in the colorful goods made during the Silla and Goryeo dynasties. Commoners in Korea wore white during the Joseon period to save the cost of dying textiles, but that was hardly the case in Korea’s earlier dynasties.

It appears more discussions on what constitutes “traditional Korean beauty” will take place - or should take place - in the Korean academia with the Leeum exhibition and more.

“Scholarly studies on Korea’s jewelry artworks have yet to fully kick off, and I hope more in-depth discussions take place in the future,” said Shin Sook, art historian and an instructor at Hongik University.