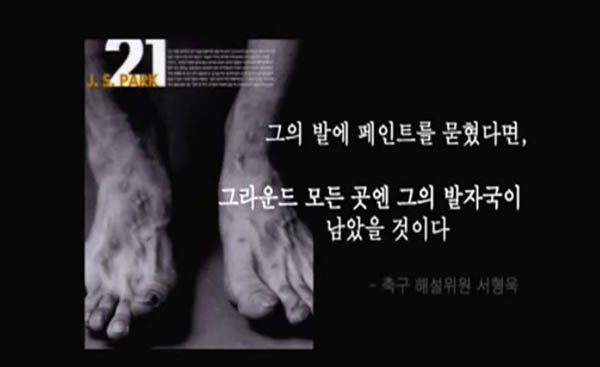 What meaning can five minutes have?

“Knowledge Channel e,” a long-running TV show on EBS that itself lasts only five minutes, answers that question every weekday.

It take five minutes for the human brain to process 30 trillion requests or for 9,000 galaxies to collide.

It was also the amount of time that Russian literary giant Fyodor M. Dostoevsky (1821-81) had to live when he was fastened to a post in preparation for his execution.

In that “enormous wealth of time” before the Russian emperor issued a pardon, he had many thoughts, as later described in the novel “The Idiot” and other masterpieces.

The program’s short glances at interesting ideas have proved quite popular, and its 1,000th episode will air tomorrow.

With the nickname “five-minute humanities class,” the program has been dealing with various political, economic, social and cultural issues for years. It is unique in that there is no narration, just images, text and music.

The program launched on Sept. 5, 2005 and has been airing for seven years and eight months. The cumulative number of visitors to the program’s Web site reached 18.8 million as of Wednesday, and eight books about content from the program have been published, with sales exceeding one million copies.

The producer has a theory as to why the program has grown so popular.

“We sum up a story that can take 50 minutes into five minutes, delivering messages very concisely and clearly,” said Lee Sang-beom. “And we don’t carry stories chronologically. Instead, we put some twists into the stories.”

For example, the episode titled “A Perfect Crime” from 2012 told of cases in which old men and women were killed.

They were living in various parts of the world, but the killings took place under similar conditions with similar timing. At the end of the episode, their common murderer is revealed: the sweltering heat.

“The short time period and the twists on our episodes make the audience watch the program until the end,” Lee said.