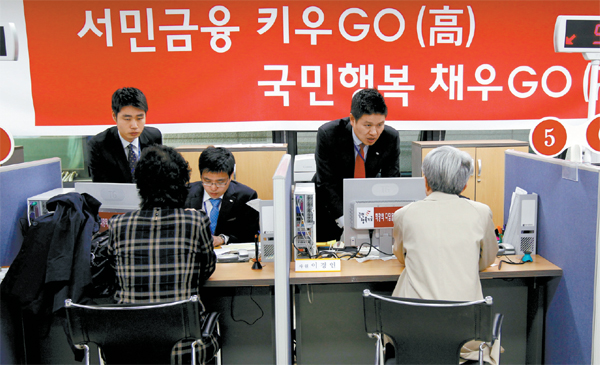 Applicants for the National Happiness Fund debt relief program get counseling last Monday at the Gangnam branch of the Korea Asset Management Corporation in southern Seoul. The number of applicants has already reached almost 60,000. By Kim Seong-ryong

The government has seen an exploding number of applicants for the so-called National Happiness Fund, meant to help low-income families struggling with debt, in just five days after it began receiving preliminary applications last Monday.

Almost 60,000 people or households have applied for the debt adjustment program, almost one-fifth of the 320,000 ceiling the government predicted in advance.

Speculation is growing that the government may have to raise the number of beneficiaries - up to 500,000 - and boost the size of the fund beyond the already prepared 1.5 trillion won ($1.35 billion).

But the Financial Services Commission, the top financial watchdog, made it clear yesterday it has “no plans to boost the fund scale.”

“At this moment,” it said in a statement, “the fund stands at a sufficient level.”

The program will write off as much as 50 percent (70 percent for recipients of national basic livelihood allowances) of loans held by debtors who have borrowed 100 million won or less from financial institutions and been in arrears for at least six months as of the end of February.

The remaining debt may be repaid over a period of up to 10 years.

The preliminary application period is from April 22 through tomorrow. The actual process to select recipients will start Wednesday and last until the end of October.

“Because of the fact that the fund is one of the major campaign pledges of the new administration, debtors flocked to counters at an early stage of applications,” said a high-ranking official at the commission. “But when the actual reviewing process filters out unsuitable applicants, the number of real beneficiaries won’t be that huge.”

The commission stressed that it has already come up with measures so the fund won’t run out.

“We may borrow from financial companies with the distressed debt of the people in arrears as collateral,” said the official.

Of the 1.5 trillion won to be assigned over the next five years, 80 billion won will be raised through a fund controlled by the Korea Asset Management Corporation. If needed, loans will be taken out and bonds issued. The remaining 70 billion won is expected to be collected from the fund’s proceeds.

The fund will automatically disqualify borrowers who delay payments on their loans for over three months. If they get thrown out of the program, their original debt is restored.

The borrower may postpone payment for four times for a combined period of up to six months in case of unemployment or illness.