Helping moms come back to work

Helping moms come back to work 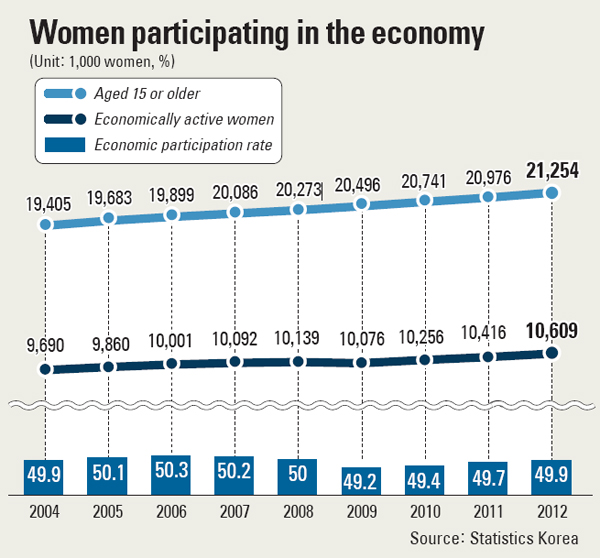 Following the controversy over a military service incentive system for male job seekers, in which guys who did military service got a leg up when applying for jobs, a similar idea is being floated for mothers.

According to a bill being introduced to the National Assembly by a ruling party lawmaker, women who reenter the workplace after giving birth and working as stay-at-home mothers will get similarly extra bonus points in the job application process.

The bill was proposed to help mothers reenter the job market, improving the workforce in a country with an aging population. It would also encourage women to give birth if they felt they could go back to work afterward with greater ease.

According to data from Statistics Korea and the Ministry of Employment and Labor, the number of women capable of working aged 15 or above was 21.25 million last year - 926,000 more than the number of men.

But the number of women in the labor force was only 10.609 million, or 49.9 percent of the total, much lower than the 73.3 percent of men working last year.

The number of economically inactive women was 10.65 million, double the number of males last year.

The number of women who quit their jobs due to marriage, pregnancy and childbirth were 1.9 million out of 9.86 million women aged between 15 and 54 as of June 2011, according to the Statistics Korea.

The economic participation rate of females in their 30s, the age group that usually gives birth and raises children, was 56 percent, lower than 65.9 percent of women in their 40s.

There has been growing opinion that institutional measures should assist mothers to get back to work.

The bill was first proposed last December by Shin Eui-jin, lawmaker of the ruling Saenuri Party. The official title of the legislation, currently being debated in the Environment and Labor Committee, is Partial Amendment to the Equal Employment Opportunity and Work-Family Balance Assistance Act.

It finally went to a bill-screening subcommittee of the Environment and Labor Committee after four months.

Although the bill was intended to compensate those who sacrificed their careers to have children, it attracted charges of sexual discrimination and unfairness.

After some women strongly opposed the proposal, the situation surrounding the mother incentive law has become even more complex.

“Giving advantages to mothers is not only sexual discrimination against male job seekers but is also unfair to unmarried women and infertile women,” said a spokesman for the Korean Women’s Association United.

“In addition, it could aggravate youth unemployment, which has been a serious social issue for a long time,” he said.

“The legislation, along with the bill to reward military service in hiring, could also lead to wrong conception of gender roles that child care is women’s work and that military service is a job for men only,” the spokesman continued. “It could also give rise to reverse discrimination against female employees at workplaces.”

The amendment proposes to add a bonus of 2 percent to exam scores of mothers when they apply for jobs at public institutions or large corporations.

However, according to the bill, the number of mothers employed with bonus points should not exceed 20 percent of the total employees hired. In addition, when calculating salary class or wages, the time period of pregnancy, childbirth and childcare is excluded from the woman’s career to prevent double compensation.

The bill is almost the same as proposed legislation to establish a military service incentive system currently being debated in the National Defense Committee at the National Assembly.

Legislation to give bonus points to male job seekers for having served in the military was turned down in 1999 but was revived during the presidential campaign of President Park Geun-hye.

Women’s organizations say that rather than giving benefits to certain groups, it is more important to solve the system that forces women workers to retire when they want to have children.

When the polling agency Mono Research surveyed 1,071 adult men and women aged over 19 about the pros and cons of the incentive system for mothers, 61.3 percent said they were in favor of the bill as a measure to use more female workers and help solve the low fertility rate.

When Mono Research analyzed the responses by gender, more men than women supported the bill, with 64.7 percent of male respondents in favor and 58 percent of female.

By age groups, those in their 20s and 40s were most positive about the plan.

“Since there is already maternity leave and parental leave at most workplaces, I don’t think giving extra points for women who quit work because of raising children is necessary,” said a 52-year-old female respondent to the survey.

On the other hand, some male respondents said they agree that there should be bonus points for women who could not continue their careers due to babies.

“The higher ratio of males in favor of the bill reflects their expectations for housewives and mothers to also participate in economic activities amid the slowing growth of the economy,” said a research fellow at Mono Research.

Meanwhile, for the bill giving incentives to men who served in the military, the support rate was distinct between genders, with 74.6 percent of male respondents being in favor, while 45.1 percent of females agreed with the legislation.

As the bills for military veterans and mothers are being discussed at the same time in the National Assembly, some see a kind of gender clash. In fact, the two bills are for different job markets.

The bill for military service applies to recruitment of new employees, while the bill for mothers is for hiring experienced employees.

“The bill to give bonus points to male job seekers for having done military service, which is required of Korean males, is discrimination against women in the job market for new employees,” said a professor of sociology at Sogang University. “The bill to give 2 percent extra points to mothers seeking jobs is also another form of discrimination against male job seekers that have similar career experience in the job market for experienced employees.”

The common point for both bills is that they naturally generate controversy over equality in that they grant bonus points to specific groups.

“The legislations regarding labor and the economy such as mandatory extension of retirement age, the internationally unprecedented mandatory business closure days for large businesses and the bonus points system for mothers could undermine social integration as well as weaken the whole growth engine of our economy,” said the organizations.

They added that populist economic legislation is dampening the future of the Korean economy because it will put a damper on investments by corporations.