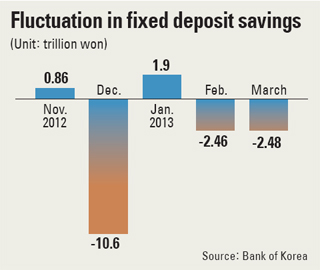 Recently, a 48-year-old surnamed Jung completely changed the way he manages his 1.2 billion won ($1.1 million) asset portfolio. From a 600 million won bank account, Jung took out 200 million won late last year to invest in an immediate annuity product and bought 100 million won worth of gold bars from a local bank. He also transferred 200 million won into a stock investment account.

Jung moved to diversify his portfolio by reducing his bank balance after the government imposed stricter rules on aggregate taxation of financing income. Also, he felt there was a greater possibility that information about his cash trading would be exposed to the tax authority.

“I judged that it would be much better to possess spot goods like gold rather than depositing money at local banks at a time when the interest rate has plunged to the 2 percent level rather than exposing my income,” Jung said.

Despite government efforts to normalize the underground economy by bringing black money into the market, concerns are rising as Koreans are hiding their cash to avoid their assets being traced.

The balance of local banks’ fixed deposits has dropped for two consecutive months, while safe companies are flourishing. Cash that has been taken out of bank deposits is being invested in gold or local stocks because no tax is imposed on profit made from stock investments.

The government plans to amend the Financial Intelligence Unit (FIU) Act. Until now, the Financial Services Commission’s FIU provided information on individuals’ cash transactions to the National Tax Service only on suspicion of “tax crimes.” The revision, however, broadens that definition to include “any kind of illegal tax evasion activities.”

For example, in the past, someone with 1.2 billion won at a bank earning interest of about 3 percent was required to pay tax, but the target group has been lowered to depositors with 600 million won in bank savings.

With stricter rules, depositors are pulling cash out of banks and investing elsewhere.

According to the Bank of Korea, the total balance of fixed deposits at banks dropped a total of 5 trillion won in February and March to 553.3 trillion won.

“Among asset holders are many who don’t have jobs, but are investors,” said Lee Hee-soo of Woori Bank. “They are moving their cash to somewhere else out of concern that their financial trading and income will be exposed.”

Gold and the stock market have been the destinations for much of that cash.

Though gold prices have been plunging, purchases in Korea have increased. Sales of gold bars at Shinsegae Department Store, for example, have jumped recently compared to last year.

“Items like gold bars at department stores were simply assorted products,” said an official from Shinsegae. “But sales have surged recently and gold bars are now becoming main sales items at stores.”

The official added that with various tax reforms taking place and social insecurity, the number of people wanting to buy gold bars is increasing.

As for Lotte Department Store, it has sold gold bars from the Golden Dew brand at all of its branches since November. At the main branch alone, sales of gold in the first half of April were five to six times higher than they were at all stores during a comparable period in November.

“Many people are visiting our store because they are able to purchase 10-gram or 50-gram gold bars using their credit cards,” said an official from Golden Dew.

With the growing popularity of gold bars, customers who wish to buy gold bars at Shinhan Bank must wait more than a month. The bank has doubled its maximum sales volume this year compared to last year, but the number of people looking to buy has increased more.

During the first week of sales last month, it sold 1.3 billion won worth of gold bars but last week, sales surged to 5.5 billion won.

With gold bars actively being bought and sold, sales of safes have increased. Eagle Safes, founded in 1973, saw year-on-year sales double in March and expects a record year.

“Sales of safes used at companies have remained the same, but demand for safe-boxes used at homes has increased,” said Kwon Young-seok of the company’s marketing team.

Asset holders are looking to invest in the local stock market. According to the Korea Financial Investment Association, the balance of customer deposits in the capital market was 17 trillion won late last year and reached 18.5 trillion won as of last Thursday. Customer deposits are standby funds for investment in stocks.

“Many of our customers are thinking of investing their assets in stocks,” said Kong Sung-ryul of Kookmin Bank’s Mokdong branch.