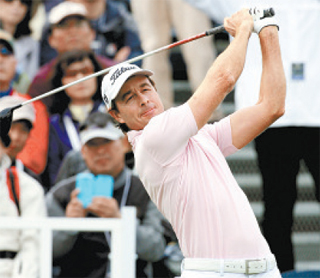 Brett Rumford of Australia hits his tee-shot during the final round of the Ballantine’s Championship at Blackstone Golf Club in Icheon, Gyeonggi, yesterday. Rumford won the tournament in a three-way playoff. [NEWSIS]

Australian Brett Rumford beat out his compatriot, Marcus Fraser, and Peter Whiteford of Scotland with an eagle putt in the first playoff hole to claim the Ballantine’s Championship in Icheon, Gyeonggi, yesterday.

Kim Hyung-sung was tied for sixth, the only Korean to finish in the top 10, as the sole Korea-held European Tour event proved once again insurmountable for Korean players.

Rumford entered the playoff at the Blackstone Golf Club after his four-under performance on the final round tied him with Fraser and Whiteford at 11-under-par 277. He carded a 1.5-meter (4.9-foot) eagle putt to win his fourth European Tour victory.

Rumford became the first player to win a European Tour playoff with an eagle since Matteo Manassero, who beat Louis Oosthuizen in the 2012 Barclays Singapore Open.

“It was mixed emotions coming home, and I’m really lost for words at the moment, but there are a lot of people I need to thank - starting with my wife, Sally,” Rumford, who won his first European Tour victory since 2007, told Europeantour.com. With the Korea win, he took home 367,500 euros. His world ranking will jump to 120th from 253rd.

Jaidee Thongchai, the 2009 winner, surged with a seven-under performance for a top-10 finish. The Thai joined four others at seven-under-par 281, including Kim and overnight leader Alex Noren of Sweden, who collapsed with a two-over par yesterday. He also suffered a penalty shot at the second hole of the final round.

Kim carded a five-under yesterday. Three other Koreans, Hong Soon-sang, Kim Gi-whan and Kim Kyung-tae were tied for 11th at one stroke behind.