Park picks up 3rd LPGA win of season in Texas

Park picks up 3rd LPGA win of season in Texas 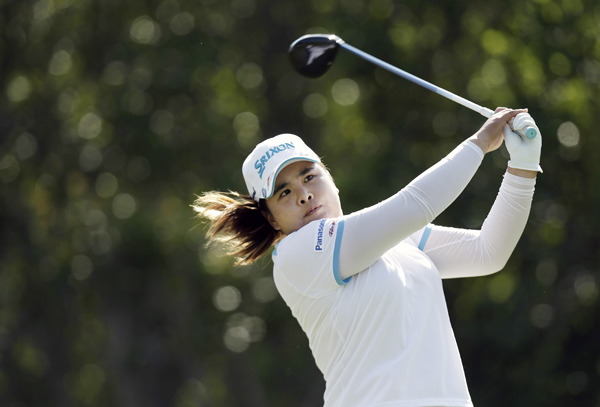 Park In-bee, of Korea, watches her tee shot on the 18th hole during the final round of the North Texas LPGA Shootout golf tournament on Sunday, at Las Colinas Country Club in Irving, Texas. [AP/NEWSIS]

Park, the top-ranked woman in the world, was in the middle of a solid final round and still trailed by two strokes after the playing partners both had birdies at the par-5 10th on Sunday.

Everything changed in a two-hole stretch, when Park went ahead with consecutive pars.

The 24-year-old Korean went on to a bogey-free 4-under 67 that put her one stroke ahead of Ciganda, good enough for her third victory this season and fifth in her past 18 starts.

“She was hitting fairways and greens and making putts,” said Park, who finished at 13-under.

“And I thought I played really great today, but I just missed a lot of birdie opportunities, so I thought this tournament might not be mine because I missed that many opportunities and Carlota was playing great golf. But she made a couple mistakes on the back nine.”

Ciganda’s drive at the 416-yard 14th hole settled in the right rough with a tree between her and the green, and her shot from about 130 yards clipped a branch and came up short. She had a chance to save par but her 6-foot putt was short, and Park’s par had her within a stroke of the lead.

After stepping away from her approach at No. 15, to a green surrounded by water on three sides, Ciganda hit a shot that went to the right and then rolled down into the water.

Ciganda had to go back to a drop zone, where the 22-year-old Spaniard had a decent pitch before her first putt rolled over the left edge of the green for a double-bogey 6.

Park had another par and never trailed again.

With the $195,000 check for first place, Park exceeded $6 million in career earnings and will be No. 1 for the third week in a row. It was her sixth career LPGA victory, along with four more wins in Japan.

Fifth-ranked Suzann Pettersen from Norway, the winner in Hawaii last week, had a closing 66 to get to 10 under and finish third. Park Hee-young, (64) and Ryu So-yeon (68) tied for fourth at 275.

Park Hee-young’s 64 was the best round of the day on the 6,439-yard course with plenty of sloping fairways and raised greens.

Stacy Lewis, the Texas native and No. 2 player in the world, had a closing 66 when all six birdies and her only bogey came between Nos. 7-17. She tied for seventh for her sixth top-10 finish this season.

Park sank a 4-foot birdie putt on the par-5 18th after Ciganda also birdied even after her final drive went into the right rough.

But they had an unusual wait after hitting their drives, when Lee Jee-young, playing two groups ahead of them, had to replay the hole.

Before Lee signed her scorecard, officials determined she took an improper drop after her drive at No. 18 went out of bounds. Lee carded a 10 before Ciganda and Park got to play out the hole.

“It was all right. I mean it was actually really good, it ended up really good for me because I made a birdie,” Park said of the delay. “Maybe if I hit it in the water maybe I could have blamed it on them.”