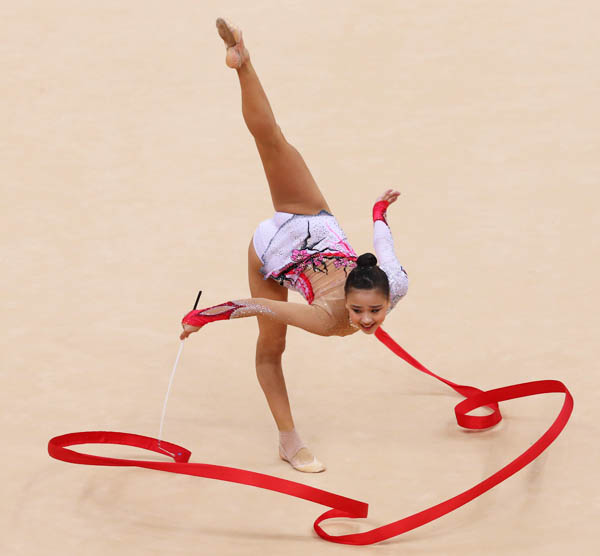 Son Yeon-jae performs with a ribbon in the qualification event at Wembley Arena in London during the 2012 London Olympics. [Joint Press Corps]

Son Yeon-jae won a silver medal in the ribbon finals at the FIG Rhythmic Gymnastics World Cup in Italy on Sunday.

It was the first time a Korean athlete won a silver medal at any discipline of a rhythmic gymnastic World Cup. Son, who finished fifth in the individual all-around in the 2012 London Olympics, won a bronze medal at several World Cups, including with the ball at the previous World Cup held in Lisbon early this month.

At the Italian World Cup in Adriatic Arena in Pesaro, Son, 18, received 17.483 points in the ribbon final, second-highest to Melitina Staniouta of Belarus, who earned 17.850 points.

She competed second to last among the nine finalists. Before her, Ganna Rizatdinova of Ukraine was leading the pack with 17.417 points. Son, who received 17.400 points in the preliminary, performed to Tchaikovsky’s “Swan Lake.” Her precise repetition of fouette turns sent her to the top before Staniouta, who competed last, pushed her aside to the runner-up. 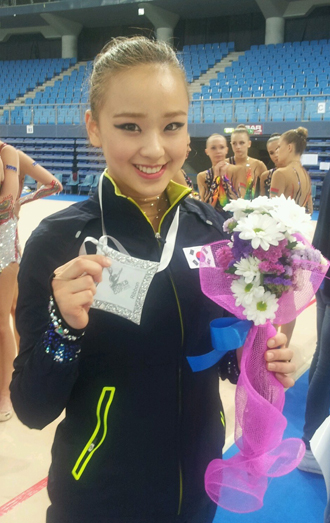 Son Yeon-jae poses with the silver medal that she won in the ribbon finals at the FIG Rhythmic Gymnastics World Cup in Italy on Sunday. Provided by IB Worldwide

“While Son Yeon-jae turned, she didn’t lose her balance at all. It was like she was pivoting as if her foot was glued to the ground,” Cha said.

“Unlike ballet, fouette in the gymnastic discipline of ribbon requires continuous ribbon handling during the turns, so it is physically demanding. Only world-class athletes can perform so many turns with such perfection.”

Cha said a recent rhythmic gymnastic trend of stressing artistic aspects as opposed to technical aspects will work in favor of Son. The spectators at Adriatic Arena sent big roars to Son during her fouette moves.

Up to two athletes from each of those countries can participate in an A-Category World Cup. Chun Song-e is also competing in it, the Korea Gymnastic Association said. There are eight World Cups this year. Only one of them is in category A.

Meanwhile, Son will perform in a gala show in June.

The 2013 event will feature gymnasts collaborating with other artistic performances such as musical and hip hop. Son’s World Cup rivals such as Rizatdinova, Staniouta and Alina Maksymenko of Ukraine will also perform during the gala show.