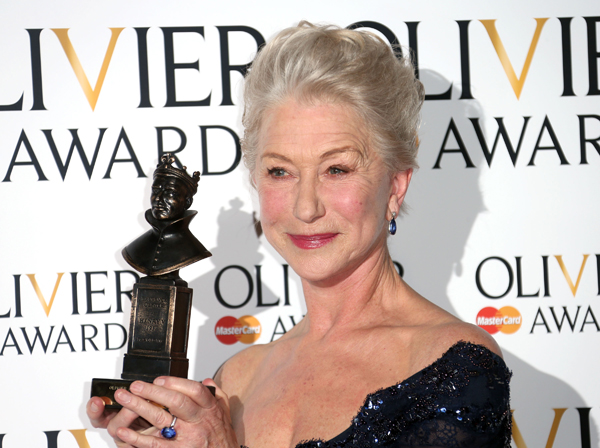 Mirren had been favorite for the trophy at Britain’s equivalent of Broadway’s Tonys for her regal yet vulnerable turn in Morgan’s play about the private weekly meetings between the monarch and Britain’s prime ministers over the her 61-year reign.

Mirren is no stranger to royalty - she won an Academy award in 2007 for the same role in “The Queen.’’

Accepting the award, she joked that it was the queen who deserved an award, “for the most consistent and committed performance of the 20th century, and probably the 21st century.’’

The winners were being announced during a song- and dance-filled ceremony at London’s Royal Opera House hosted by “Downton Abbey’’ actor Hugh Bonneville and stage star Sheridan Smith - who kicked things off by belting out “Diamonds Are A Girl’s Best Friend.’’

“Homeland’’ star Damian Lewis, “Sex and the City’’ alumna Kim Cattrall and former boy wizard Daniel Radcliffe were among the presenters. The show is due to include performances from “Glee’’ star Matthew Morrison and Tony-winning diva Idina Menzel.

“It’s important as an actor to be absolutely fearless, and she is,’’ he said.

Luke Treadaway was named best actor for “The Curious Incident of the Dog in the Night-Time,’’ beating Rupert Everett for Oscar Wilde drama “The Judas Kiss’’; James McAvoy for “Macbeth’’; Mark Rylance for a cross-dressing turn in “Twelfth Night’’; Rafe Spall for the relationship drama “Constellations.’’

The National Theatre’s acclaimed production of “Curious Incident’’ - based on Mark Haddon’s novel about a mystery-solving boy with Asperger’s syndrome - led the race with eight nominations, while the jaunty musical “Top Hat’’ had seven.

“Curious Incident’’ took awards for set, lighting and sound, and for supporting actress Nicola Walker. “Every rehearsal and every single performance was a prize, so this is completely overwhelming,’’ Walker said.