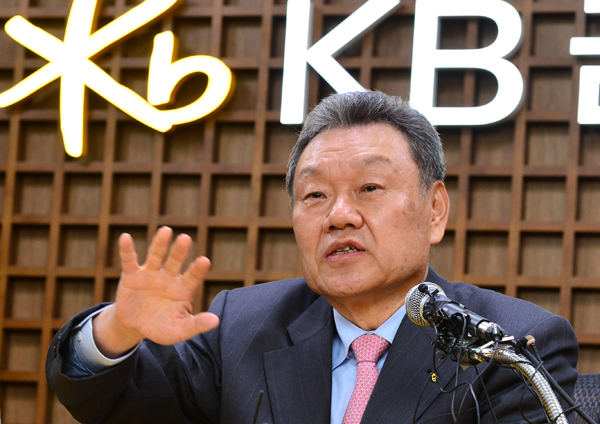 Euh Yoon-dae, chairman of KB Financial Group, said yesterday he will not serve a second term in the top post when his chairmanship ends in July. After Euh’s term ends, all four financial tycoons appointed during the Lee Myung-bak government will have stepped down.

“I thought that it would be better for me to tender my thoughts that I will not be serving a consecutive term so that I don’t burden the outside directors,” Euh said yesterday at KB Financial Group headquarters in Myeong-dong, central Seoul. “I am making this announcement to prevent any kind of misunderstanding and also thinking that it isn’t socially right to make it seem as if an individual [Euh] is clinging to a position.”

Euh has been under pressure to resign to pave way for the new Park Geun-hye administration to start fresh, following moves made by other so-called “MB men.” Kang Man-soo, who headed the Korea Development Bank Financial Group, stepped down earlier this month and Lee Pal-seung, chairman of Woori Financial Group, followed suit. Former Hana Financial Group Chairman Kim Seung-yu was also pointed out as a close associate of former President Lee. Euh is the last of the four MB men remaining in the Park administration.

As for the new chairman, Euh, a former economics professor and president of Korea University, said he will “leave it up to the outside directors to choose.”

After Kang from KDB Financial Group resigned, Hong Ky-tack, an economics professor from Chung-Ang University, was nominated and appointed KDB Financial head. Hong served as one of the members of the first economy subcommittee under President Park’s transition team. Woori Financial Group is also speeding up its appointment process after Chairman Lee offered to step down. Last week, Woori formed a special committee involving three outside directors, three outside experts and one official from the Korea Deposit Insurance Corporation, to screen candidates.

KB Financial Group will form a similar committee at a board of directors’ meeting next month.