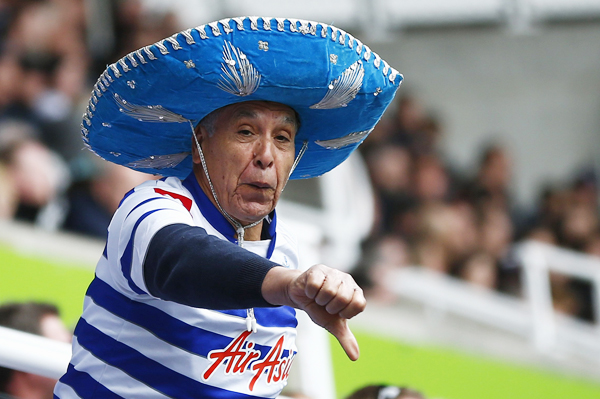 A Queens Park Rangers fan reacts during their English Premier League match against Reading at the Madejski Stadium in Reading, Sunday. The two teams were relegated from the top-flight league with a scoreless draw. [REUTERS/NEWSIS]

LONDON - Reading and Queens Park Rangers were put out of their misery and relegated from the Premier League on Sunday, while Robin van Persie ensured his former club, Arsenal, will have to put up a tough fight to reach the Champions League.

Reading and QPR were demoted after they drew, 0-0, leaving one more spot to be decided in the drop zone.

For QPR manager Harry Redknapp, the priority now is trying to sell players on high wages as they prepare for life with reduced revenue in the second tier.

“There are problems within the club,” Redknapp said. “It is not easy to change when people have got a contract. I’ve heard over the years that players will want to leave because you have been relegated, but where are they going to go?

“If they had played better, perhaps we wouldn’t have gone down - one or two will be wanted by good clubs. There are an awful lot here that have good contracts and it would be hard to get rid of them even if I wanted to shift them. You can’t shift people on two- or three-year contracts for good money.”

Returning to the Premier League won’t be easy after enjoying two years in the top flight, Redknapp believes.

“QPR have got no divine right to come back up next season,” said Redknapp.

Reading manager Nigel Adkins has only had since March to mount a survival bid since replacing Brian McDermott, but the team collected just two points from his five games in charge. “We’ve got a really good group of players, they won the Championship last season,” Adkins said. “But unfortunately the Premier League got away from us this year.”

While Reading fans are ruing relegation, Arsenal followers are lamenting the failure to end a trophy drought stretching back to 2005.

Even more galling on Sunday for the Arsenal fans booing was the sight of Van Persie being honored by the team he left in August and is now enjoying the success they covet. Booed relentlessly on his return to Arsenal, Van Persie gave away the ball that resulted in newly crowned champion Manchester United conceding an early goal. But he then scored from the penalty spot to clinch a 1-1 draw. Arsenal’s players formed a guard of honor to greet United’s title-winners onto the Emirates Stadium pitch.

Such respect ended immediately after kickoff, and it was Van Persie who gave the ball away in midfield inside two minutes. That allowed Tomas Rosicky to pick out Walcott, who smashed in a low shot past goalkeeper David De Gea.

The hosts, with a Champions League place to fight for, were playing the slicker more incisive football.

But then it was Van Persie who soon capitalized on a mistake, intercepting Bacary Sagna’s poor back pass and racing clear into the area before being brought down by the defender with a sliding challenge.

From the penalty spot, Van Persie scored his 31st goal of the season - but declined to celebrate.

“Yes, that has become basically now another way to behave for football players in England,” Arsenal manager Arsene Wenger said.