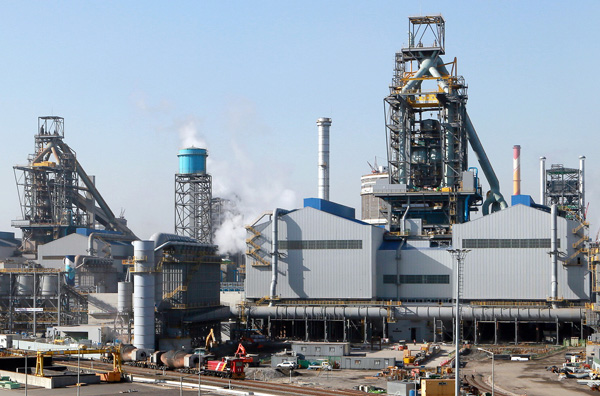 Hyundai Steel’s plant in Dangjin, South Chungcheong, will be the site for new special steels and iron powder plants. Provided by the company

The automotive group controlled by Chairman Chung Mong-koo said the two plants will not only boost product quality, but help the entire automobile industry. The company estimates the two plants will have an economic impact of 6.1 trillion won and generate 22,000 jobs.

“This will also likely enhance the nation’s trade balance,” the company said in a release. “Thirty percent of local demand for special steels, which is about 2.31 million tons, and 70,000 tons of iron powder are imported.”

The group said that the special steel plant project will be led by its affiliate Hyundai Steel, which specializes in steel products for automobiles. The company will begin construction process in the fourth quarter of this year. The plant will have an annual production capacity of 1 million tons and be built on 236,000 square meters of land at Hyundai Steel’s Dangjin plant.

The company said special steels are core components for engine and transmission parts and essential for vehicle quality. Hyundai expects 20,600 jobs and 5.67 trillion won of value added inducement will occur while operating this plant.

As for iron powder plant, Hyundai Motor said the construction started on 33,000 square-meters of land in front of Hyundai Steel’s Dangjin plant. Total of 120 billion won is injected for the construction and the plant, which will have annual production capacity of 25,000 tons, is expected to be completed next year. The company expects the plant will employ 1,600 people.

The group hopes the completion of plants will create synergy among its affiliates - Hyundai Motor, Kia Motors, Hyundai Steel and Hyundai Hysco - when it comes to developing high tech vehicle parts and components.

Following the world trend of adopting rigid environmental and safety regulations, along with an emphasis on fuel economy, automakers are striving to produce cars that are both lighted and stronger.

Other manufacturers cooperate with steel companies to develop more advanced vehicle parts. Volkswagen works with ArcelorMittal, while BMW is with ThyssenKrupp. Toyota collaborates with Nippon Steel Corporation, and Honda has joined forces with JFE Steel.

Hyundai Motor Group said its effort to develop steel plates for future vehicles will also get a boost when Hyundai Steel completes its third blast furnace at the Dangjin plant in September.

Hyundai built its first blast furnace in 2006 and has invested 9.5 trillion won to develop the business. As the third blast furnace is completed, the affiliate total annual capacity of steel production will reach 24 million tons.

Last weekend, Hyundai Motor announced it will expand its third plant in China to an annual production capacity of 450,000 vehicles by the end of this year, an increase of 150,000 units. Hyundai, which works with Beijing Automotive Group there, has two other plants in China, each with a capacity of 300,000 vehicles.

Kia Motors, which also has two plants in China jointly working with Dongfeng Motor, is constructing its third plant in Yancheng that could produce 300,000 vehicles from next year.

With the additional production capacity, Hyundai and Kia will be able to turn out 1.78 million vehicles per year in China. Hyundai and Kia sold 1.33 million units in China last year.