7 workers stay behind in Kaesong

7 workers stay behind in Kaesong 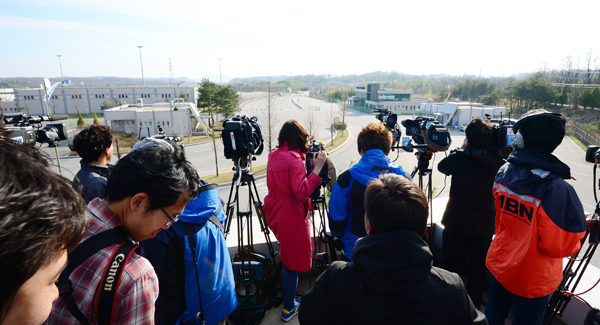 Members of the media wait for South Korean workers returning from the Kaesong Industrial Complex in North Korea at the customs, immigration and quarantine office near the border village of Panmunjom in Paju, Gyeonggi, yesterday. [NEWSIS]

After delaying the return of the remaining 50 South Korean workers who are mostly government officials and civil servants in charge of managing the complex facilities, North Korea approved the exit of 43 of them around 8:30 p.m. last night.

The other seven workers, including key officials in the management committee and two KT workers, will stay behind to resolve unpaid wages and tax issues with North Korea.

The official said negotiations include issues like whether to allow South Korean vehicles to enter the zone later to bring out the remaining raw materials, as well as unpaid wages for North Korean employees.

The 50 South Koreans who remained in the complex were scheduled to return to the South around 5 p.m. yesterday afternoon.

The South Korean government announced its decision to pull out all workers, effectively shutting down the 8-year-old complex, in response to the North’s decision to suspend operations there.

They tried to bring out raw materials and other items, piling them on cars and trucks, because they were uncertain when they will be able to re-enter Kaesong.

Most of the 50 remaining workers were officials or civil servants in charge of infrastructure, such as from the Korea Electric Power Corporation (Kepco), Korea Water Resources Corporation (K-water), KT, a telecommunications company, and Hyundai Asan, the complex developer.

According to the Unification Ministry, Kepco had transmitted 100,000 kilowatts of electricity to a substation located in Kaesong from a substation in Paju, Gyeonggi, in the South.

If Kepco officials return to the South, no one who could control the power system would remain. Also, if the substation in Paju turns off power, the complex would likely be dark.

State-run K-water has also built a reservoir nearby that supplies 60,000 metric tons of water to the complex every day.

According to the Unification Ministry, the government has not decided whether to cut off all electricity.

If so, the three major inter-Korean project sites - Kaesong park, Mount Kumgang resort and the light-water reactor project in Nampo city - would go dark. The water supply would also be halted by a blackout.

President Park Geun-hye lashed out at Pyongyang’s defiant decision on temporary suspension of the complex.

“All the people in the world watched through television that our workers were returning from the complex, desperately trying to bring even one more thing from it,” Park said yesterday. “Now, in a situation where all of the agreements between us are nullified, who in the world will invest in North Korea?”

Still, Moon Hee-sang, interim leader of the largest opposition Democratic United Party, proposed a meeting with Park to prevent permanent shutdown of the industrial zone before the president departs for the United States and a summit with President Barack Obama.

“If the Kaesong complex shuts down, it would become a national crisis that can’t be restored,” he said yesterday.

But North Korea’s mouthpiece Rodong Sinmun said the Southern government’s decision to vacate the complex was “a shameless misbehavior” and warned it would take a “decisive measure.”

“They should know that they will never be able to avoid the responsibility for putting the Kaesong Industrial Complex at risk of complete closure with such a shameless misbehavior,” the newspaper said in an editorial yesterday. “If they [the South] continue to worsen the situation, we, as the previous warning, will take an ultimate, decisive measure.”

The newspaper also warned that if the complex shuts down, the Park Geun-hye administration will see the inter-Korean relations more deteriorated than in the Lee administration.

“If the Kaesong Industrial District is completely closed down, the current puppet regime will be stigmatized as a more hostile administration than the Lee Myung-bak puppet groups,” it said.