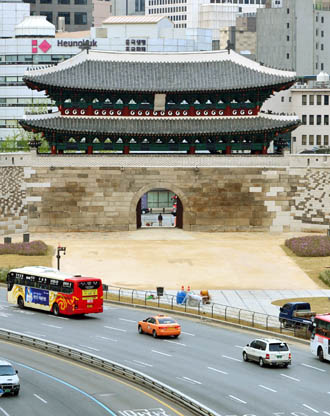 Sungnyemun - Korea’s historic gate that was destroyed in an arson attack in 2008 - was opened to the press yesterday. With the restoration complete, the gate will be open to the public beginning Sunday. [NEWSIS]

Five years after being burned down in the middle of the night, Sungnyemun, the nation’s front gate, is reopening.

To commemorate the restoration work, the Korean government is planning huge celebrations this weekend.

The 600-year-old gate made mostly of wood - Korea’s National Treasure No. 1 - was destroyed in an arson attack in February 2008 that shocked the country. At a cost of 27.7 billion won ($24.9 million), the high-profile restoration has been completed as of late April.

The ceremonies will be held from 2 p.m. to 6 p.m. on Saturday at the gate and Gwanghwamun Square in the downtown area and will include a traditional ritual called cheondo that is thought to get rid of bad luck; the unveiling of the gate’s new signboard; and the performance of “Arirang,” the traditional Korean folksong which was added to Unesco’s intangible cultural heritage list in December.

“[The nation’s] front entrance was burned down and is now opening again. So it’s only appropriate that we hold traditional ceremonies that our ancestors held when they built houses,” Lee Youn-taek, a veteran theater producer who is supervising the ceremonies, said yesterday.

The ceremonies are symbolic and aimed at boosting national prestige, Lee said, adding that the themes will include cleansing and healing, as well as coexistence and harmony. The latter two are values promoted by the Park Geun-hye administration in attempts to embrace both the conservatives and the liberals, the rich and the poor, and so on.

Kang Kyung-hwan, the chief of the heritage conservation bureau at the Cultural Heritage Administration, noted that the restoration had several principles, which included utilizing the materials left over from the fire as much as possible; restoring the gate to the way it was before it was altered and damaged during the Japanese colonization (1910-45); and using the skills, methods and equipment of the country’s best traditional artisans.

“The artisans burned hand-made roof tiles in a traditional kiln and used traditional instead of artificial paint for coloring,” Kim said.

Beginning on Sunday, the restored Sungnyemun will be open to the public every day. Moreover, visitors will be allowed to climb up the gate on Saturdays and Sundays on certain hours if they make reservations in advance.

The 2008 fire also took place after former President Lee Myung-bak - who was then the mayor of Seoul - opened the gate to public.

Since then, debates over which is more important for cultural heritage, preservation or utilization, flared up among Korean scholars and government officials.

But the CHA officials assure that the disaster prevention system has been strengthened.

They explained that a fire sprinkler system has been installed, and fire hydrants have been placed inside and outside the gate, in addition to ladder pipe nozzles, CCTVs, and heat and flame sensors.