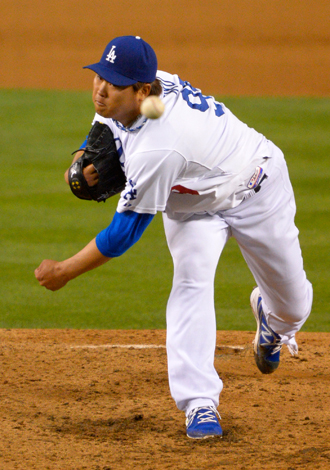 Los Angeles Dodgers starting pitcher Ryu Hyun-jin had a season-high 12 strikeouts against the Colorado Rockies, Tuesday, in Los Angeles. Ryu held the Rockies to two runs over six innings in the Dodgers’ 6-2 win, and he knocked in a run with a hit in the third inning. [AP]

Ryu Hyun-jin of the Los Angeles Dodgers wrapped up his first month in the big leagues with a third victory as Korean singer Psy grooved with his new dance number rooting for his countryman from the stands.

Ryu had a season-high 12 strikeouts as he held the Colorado Rockies’ strong lineup to two runs over six innings at Dodger Stadium on Tuesday. It was his sixth appearance as a starter, and his first victory since he struck out nine in the Dodgers’ 7-5 win on April 13. The Rockies’ .285 team average leads the major leagues.

With the win, Ryu’s record improved to 3-1, with a 3.35 ERA. “That was huge,” Dodgers manager Don Mattingly told MLB.com, complimenting Ryu.

“You could see it early on,” said Rockies manager Walt Weiss, according to MLB.com.

“He had his ‘A’ game and it was going to be tough to put together a big inning or something big against him. He was in control. There was a big difference between his fastball and changeup - 93 to 80 [miles per hour] - and he was commanding everything.”

Ryu gave his game-worn jersey to Psy after the game.

“I’m just very thankful the game turned out the way it did,” Ryu said through a translator. “It would’ve been a really different situation if it went the other way. I’m glad he came by.”

Carlos Gonzalez gave the Rockies a 1-0 lead in the first inning with a home run ? but it didn’t last long.

Ryu was in control throughout most of his outing. After giving up the home run to Gonzalez, he retired 14 of the next 15 batters he faced. His only blemish during that stretch was a one-out walk to Gonzalez in the fourth inning.

“He pitched well,” said Jordan Pacheco, who struck out three times against Ryu. “It does make it difficult when you haven’t faced a guy. You don’t really know his tendencies or what he likes to go to. But at the same time, he hasn’t faced you, so it goes both ways.”

Ryu put an end to the threat and his night with one of his strikeouts of Pacheco. 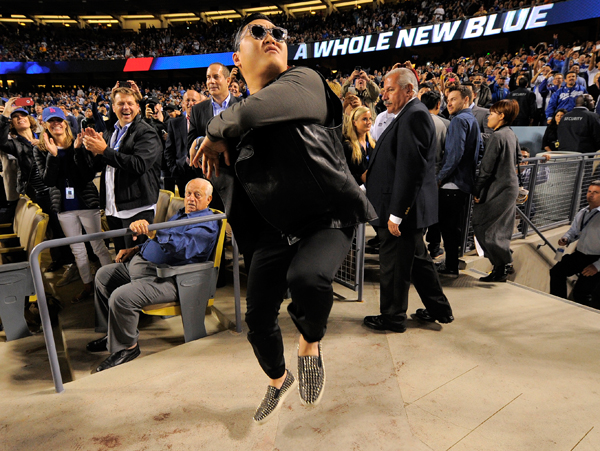 Korean pop artist Psy, who was at Dodger Stadium to meet with his fellow countryman, dances for fans. After the game, Ryu gave his game-worn jersey to the pop star. Seated behind Psy is former Dodgers manager Tommy Lasorda, who currently serves as a special ambassador for the team and scouts, evaluates and teaches minor-league players. [NEWSIS]

Hanley Ramirez, who had been sidelined after undergoing thumb surgery in the offseason, highlighted his return with a solo home run in the third inning.

The Dodgers countered with a run-scoring single by Matt Kemp and a sacrifice fly by Adrian Gonzalez in the bottom half of the first, then added to the lead in the second when Jerry Hairston Jr, a late replacement for Carl Crawford, singled home Juan Uribe from second base. Hairston took second when left fielder Michael Cuddyer tried to throw out Uribe at home.

Crawford was scratched from the lineup with tightness in his right hamstring but will likely be back in left field Wednesday.

Nick Punto’s second hit in as many innings scored Hairston and gave the Dodgers a 4-1 lead. Ramirez’s home run provided the Dodgers with a four-run cushion.

The Dodgers extended the third inning when Andre Ethier doubled and scored on a hit by Ryu.

The Rockies had to have some sense of what awaited them. Kemp entered the game with a .435 batting average against Rockies starter Jorge De La Rosa (2-3).

Punto raised his batting average against De La Rosa to .538 with his hit in the second inning.

De La Rosa saw his career record against the Dodgers fall to 0-8.

“It’s like they know what’s coming,” said De La Rosa, who had logged quality starts in his four previous outings. “I have to do something different the next time I face them.”

The Rockies tried to mount a comeback in the sixth inning. Dexter Fowler reached on an infield hit with one out, and scrambled to second when Josh Rutledge grounded out to third. Fowler stole third before scoring on a double to right field by Cuddyer.

Ronald Belisario wasn’t as efficient as Ryu on the mound, allowing two runners to reach base in the seventh, but he recovered in time to strike out Fowler to end the inning.