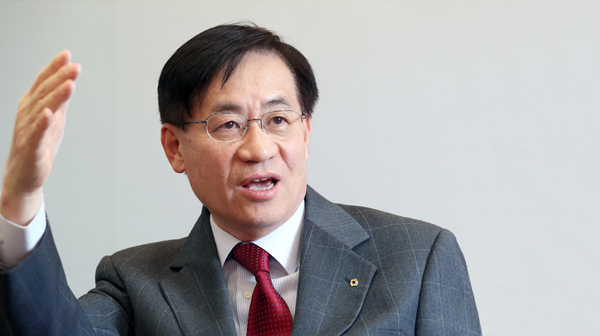 Hong Ky-tack, new chairman of the Korea Development Bank Financial Group, has expressed confidence in his ability to head the government-owned policy bank.

Hong spoke during a recent interview with the JoongAng Ilbo at a time when there was criticism of the appointment of an academic who was a member of the first economy subcommittee under President Park Geun-hye’s transition team.

“I admit I was involved in a ‘parachute appointment,’?” Hong said. “But regardless of that, I will bring [positive] outcomes.”

During her transition period, Park had emphasized she was against all parachute appointments and that those with expertise in particular fields should be appointed to important state positions. The appointment of Hong, however, was considered by the public to be the result of high-level influence. He was the first public institution chief to be appointed in the Park administration.

As a professor, Hong became an outside director at Samsung Card and Tongyang Securities, and a steering committee member at the Korea Investment Corporation. He has no experience, however, managing and operating a financial institution.

Q. Do you have any personal ties with President Park?

A. When I was a student at Sogang University, President Park was a senior by one year. From time to time, from a distance, I saw President Park walking into the campus after getting out in front of the entrance from a black jeep with two guards. At the time, miniskirts were very popular, but President Park wore skirts long enough to cover her knees.

I met her for the first time during the primary election of the then-Grand National Party [now Saenuri Party] in 2007. I helped her during the election [Park lost to former President Lee Myung-bak during the party primary]. After the Lee administration took off, I started attending a study group on economic affairs presided over by Park. Members included Kim Kwang-doo, head of Park’s think tank National Future Research Institute, and Saenuri Party Representative An Chong-bum.

Your wife, Chun Sung-bin, who is a professor at Sogang University, is considered to be very close with President Park. What is your opinion on that?

That’s not true. My wife and I were a campus couple, and we both entered university in 1971. My wife, like me, had also seen President Park from a distance at school. She has never had a conversation with President Park.

What are your roles as chairman of KDB Financial Group?

There are no set roles. I had the opportunity to review the financial policy institution [KDB] during the presidential transition team period. I first went over whether it is the right direction to privatize KDB. Secondly, when I looked into the overall picture of President Park’s creative economy, there were many elements linked to KDB. As the saying goes, if there’s high risk, there’s high return. If you’re willing to take risks, then there will be a creative economy. Thirdly, some large companies are struggling from a liquidity crunch, and to solve such a problem I thought it would be necessary to have an institution to support those companies. When a financial institution and a large company agree on a voluntary agreement [between an insolvent debtor and creditor], someone needs to take lead. The KDB should take on that leading role.

Isn’t that the role of the Korea Finance Corporation?

Yes. But there are only about 400 employees at Korea Finance Corporation [KDB has 2,900 employees].

Why do you think it is impossible to privatize KDB?

With the bubble bursting in the financial sector after the global financial crisis, the asset value of the KDB has gone down and the number of deals that can be led by the KDB has been reduced.

What is your principle for dealing with corporations that have become insolvent?

The responsibility of corporate insolvency should be on the business owners themselves. Whether or not an insolvent company should be saved should be decided after reviewing the influence the company has on the country’s economy and on a financial institution [creditor] with balance.

It’s been decided that STX Offshore and Shipbuilding will sign a voluntary agreement with its creditor for debt relief, but what will be the fate of STX Pan Ocean?