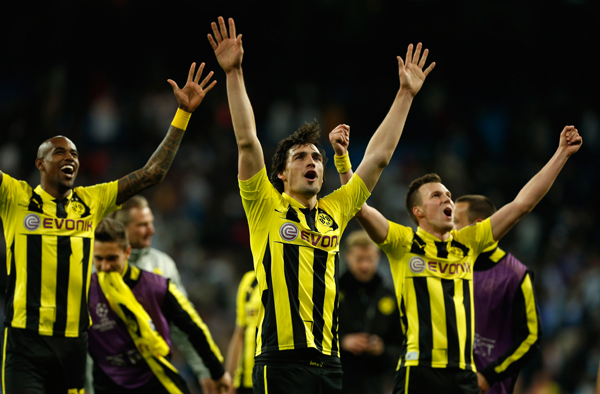 MADRID - Borussia Dortmund needed every bit of its first-leg advantage to stave off a comeback attempt by Real Madrid on Tuesday and reach its first Champions League final since 1997.

Dortmund withstood a nervy finish to book a ticket to Wembley despite a 2-0 loss to Real Madrid, which fell one goal short of overturning the German team’s dominant 4-1 win in the first leg.

After missing several good early chances, Madrid netted two late goals through Karim Benzema in the 83rd minute and Sergio Ramos in the 88th to make the Santiago Bernabeu crowd believe an improbable late comeback was in the works. A 3-0 win would have put Madrid through on away goals, but Jose Mourinho’s team never came close to a third despite five minutes of injury time.

“They put a lot of pressure on us and scored two late goals,” Dortmund midfielder Kevin Grosskreutz said. “However, we are a great club and deserved to go through. I haven’t thought about Wembley yet; let’s celebrate now and think about the final tomorrow.”

Dortmund is likely to face Bayern Munich in an all-German final at Wembley as the Bundesliga champion holds a 4-0 lead over Barcelona going into Wednesday’s return leg.

“Wembley will be one of the greatest moments in our lives, but whichever team we meet, we will not be the favorite,” Dortmund coach Juergen Klopp said. “In Wembley, everyone will see we are not going to be satisfied with just being a finalist.”

Madrid was eliminated in the semifinals for the third straight year under Mourinho, and the coach hinted again after the game that this season will be his last in Spain. Asked whether he’ll still be at the club next season, the Portuguese coach said “maybe not,” before indicating he wants to return to England.

“I know in England I’m loved,” Mourinho said. “And in Spain the situation is a bit different, because some people hate me.”

The self-proclaimed “special one” knew he’d need something special from his team after the disappointing performance in Dortmund, and a win that fell short was of little consolation.

“I don’t forget the first match, and in the first match we were very, very bad,” said Mourinho, who was trying to become the first coach to win the tournament with three teams.

Benzema put Madrid ahead after a slick passing move as Mesut Oezil found the striker in the area and he tapped into the roof of the net. Ramos then doubled the tally when he fired a high shot past goalkeeper Roman Weidenfeller.

Ramos then headed wide in injury time in Madrid’s only half-chance for a decisive goal.

“It’s a shame. Sometimes you lose, that is football,” Ramos said.