Korea is joining its Asian neighbors in discussing the future of development at the Asian Development Bank’s annual meeting that begins today and runs through Sunday in Delhi. Forum participants include finance ministers as well as all kinds of groups from NGOs to academies and private financial firms. They gather to discuss sustainable ways to help people living with less than $2 a month in developing countries and exchange feedback on various initiatives.

Hyun Oh-seok, deputy prime minister and minister of strategy and finance, named India as a newly rising economy in an economic climate where the first world is suffering from a long-lasting downturn, at a meeting last week. South Asia will be suitable for exports, he added, especially as Korea is pushing for free trade agreements with India and Vietnam.

Headed by Hyun, key figures in Korean finance will attend the meeting, including presidents of Korea Exchange Bank, Industrial Bank of Korea and more. It is a timely visit as many of them are expanding in developing countries across Asia.

As the finance minister mentioned, some 231 companies in different industries have already paved the way in India, according to Korea Chamber of Commerce and Industry. Posco is likely to debut there with a $12 billion steel-manufacturing complex after purchasing land from Odisha residents. Hyundai Motor India has topped the local passenger car market, and it remains big in the manufacturing market, producing 48 percent of exports in its industry, the company said, despite sales falling 3.4 percent early this year. 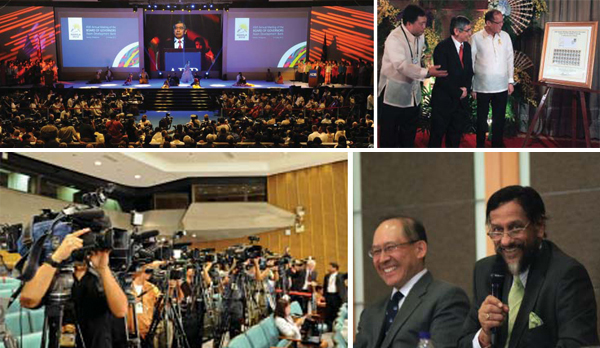 The ADB Annual Meeting Delhi 2013 will be attended by almost 5,000 financial experts of different groups, including governments, NGOs, investment banks, media and development banks. Small-group business sessions are also offered for all participants.

During the forum, international bank rating agencies such as Standard and Poor’s and Moody’s have also been invited to provide insight on how economic trends impact Asia’s developing countries. Outside international organizations and non-governmental organizations will also hold seminars with the host country, reflecting important issues that emerge through development projects. The world’s top technology firms like Microsoft and media companies will also join the discussion as sponsors who will directly partake in the process.

Started in 1966 with 31 countries, ADB now has 67 members, including 19 from outside Asia and the Pacific. Korea joined the group in the founding year as one of the early members.

Korea holds 5.04 percent of total shares in accordance with contributed funds, according to the bank’s annual report released this month. Its voting power is 4.33 percent of all members and 6.64 percent within the Asian circle. It has contributed $8.22 billion (9.1 trillion won) in total over the last 46 years.

Japan and the United States are the biggest donors to the bank and each own 15.6 percent of total stock.

Besides the bank reserve, Korea also has made contributions worth $425.23 million to three special funds. The Asian Development Fund helps countries with heavy debt or low credit, which may prevent them from building a stable economic base. The rest is given as grants to technical assistance recipients, equipping them with infrastructure and research technology, and to the ADB research institution.

A memorandum of understanding with ADB in 2008 helped accelerate Korea’s participation in the bank’s development projects. The finance ministry and bank arranged a co-financing agreement with credit agencies and commercial firms. Two state-run financial institutions, Export-Import Bank of Korea and Korea Development Bank, are part of the task force committed to collecting $3.55 billion over three years.

Construction subsidiaries of Hyundai, Posco and KCC have been the top three Korean recipients of orders from ADB’s co-financed projects. They have improved road conditions, built power plants and developed gas fields in developing countries such as Cambodia, Pakistan, the Philippines and Vietnam.