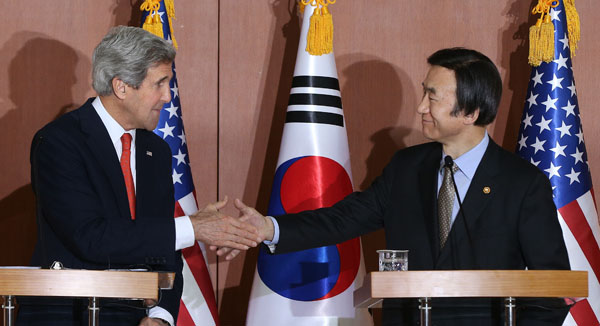 President Park Geun-hye will leave for the United States Sunday to meet with President Barack Obama next week, and one of the highlights of her visit will be a celebration of the 60th anniversary of the Korea-U.S. alliance.

Experts widely agree that the two countries’ relationship is at an all-time high. Reflecting the significance of Korea, the United States began calling the Korea-U.S. alliance a “linchpin,” said Yun Duk-min, a professor of national security and unification studies at the Korea National Diplomatic Academy.

Ahead of President Park’s visit to the U.S. this month, the White House announced the two countries will celebrate the 60th anniversary of their bilateral alliance.

“President Park’s visit underscores the importance of the U.S.-ROK alliance as a linchpin of peace and security on the Korean Peninsula and in the Asia-Pacific region, and of the central role of alliances in the president’s Asia-Pacific rebalancing effort,” the White House said on April 15.

The term “linchpin” was used in the past to describe the U.S. alliance with Japan. The Obama administration recently used the term “cornerstone” to describe the U.S.-Japan alliance, and speculation grew in Korea among diplomatic observers that Washington was putting more weight on its ties with Korea in implementing Obama’s “Pivot to Asia” policy.

While the Korea-U.S. alliance stands stronger than ever today, its 60-year history endured ups and downs.

The alliance began when South Korea and the United States signed a mutual defense treaty in 1953 at the conclusion of the Korean War. In the following year, Seoul and Washington also signed minutes and amendments relating to continued cooperation in economic and military matters, guaranteeing about $700 million in assistance from the United States in 1955 as the U.S. armed forces obtained control over the Korean military.

For the past 60 years, the Korean War truce, the mutual defense treaty and the agreed minutes served as the basis of the Korea-U.S. alliance. The alliance was seen as an important factor in preventing another war on the peninsula while supporting South Korea’s economic growth.

The alliance has endured some serious challenges. The first major challenge came in 1971 when the United States withdrew 20,000 of the 61,000 American troops stationed in Korea under the Nixon Doctrine.

Under this policy, each nation was in charge of its own security in general terms, but the United States was to provide its nuclear umbrella when requested.

As Washington shifted its policy priorities in Asia, then the Korean President Park Chung Hee pursued a nuclear weapons program, fueling conflict between Seoul and Washington. His clandestine program was only ended after his assassination in 1979.

The relationship between Korea and the United States suffered sharp confrontations between the Park regime and the Jimmy Carter administration.

Tensions reached a peak in 1976 with the “Koreagate” scandal. In a move to reverse Nixon’s decision to withdraw troops from Korea and gain influence for Seoul, Korean politicians allegedly bribed top U.S. officials and some members of Congress. Carter also criticized Park’s dictatorship.

The Koreagate scandal fueled Carter’s desire, as expressed in a campaign pledge, to withdraw more American troops from Korea, but the plan was dropped in 1978 due to widespread disagreements within the administration and in Washington. In the same year, the two countries established their Combined Forces Command.

During the 1980s, the Korea-U.S. alliance was restored by the Ronald Reagan administration. With the end of cold war and Korea’s economic growth, the United States withdrew about 7,000 Army and Air Force troops from 1991 to 1992 from Korea.

In 1994, the U.S. relinquished its peacetime control over Korean troops as Seoul and Washington aimed at changing the relationship to a mutually beneficial partnership.

After two Korean schoolgirls were killed on a road by an American armored vehicle during an exercise in 2002, the poor handling of the situation by the U.S. forces triggered massive nationwide protests. The incident fueled anti-American sentiment in Korea.

With President Roh Moo-hyun’s emphasis on “an alliance on a more equal footing,” public sentiment grew critical of the U.S. government. A series of negotiations also took place between Seoul and Washington at the time to transform the 50-year-old fraying alliance.

The U.S. decided to reposition its troops by consolidating military bases. One of the major changes was the decision to pull American soldiers away from the inter-Korean border, abandoning the long-standing tripwire function of the U.S. forces.

In 2007, the Roh administration and the George W. Bush administration agreed that the United States would hand over wartime operational control of Korean troops by 2012. The two governments also agreed to sign the Korea-U.S. free trade agreement, another landmark on the economic front.

The Korea-U.S. alliance deepened under the Lee Myung-bak administration, which began in 2008. Although Lee’s decision to reopen the Korean market to U.S. beef imports sparked massive street demonstrations and triggered yet again anti-American sentiment, the two governments managed afterwards to strengthen the bilateral relationship.

In 2009, the countries adopted a joint vision for alliance to adapt to changes in the 21st-century security environment. Noting that the Korea-U.S. mutual defense treaty remained the cornerstone of the security relationship for more than five decades, the vision said “over that time, our security alliance has strengthened and our partnership has widened to encompass political, economic, social and cultural cooperation. Together, on this solid foundation, we will build a comprehensive strategic alliance of bilateral, regional and global scope, based on common values and mutual trust.”

In the following year, at a summit between Lee and Obama, the two leaders also agreed to delay the U.S. handover of wartime operational control to Korea to December 2015. Last year, Seoul and Washington also agreed to create a new allied command structure to replace the Korea-U.S. Combined Forces Command.

And experts say important and delicate tasks lay ahead for the future of their alliance.

“During the Lee administration the two countries agreed to a comprehensive strategic alliance,” said Yun of the Korea National Diplomatic Academy. “Since then, the alliance has evolved further. Korea has expanded its role in performing global cooperation tasks such as projects in Syria and Afghanistan, and the alliance is performing its function very well.”

Yun said important challenges for Korea on upgrading the alliance with the United States come from China’s rise and the future fate of North Korea.

Reflecting the significance of Korea, the United States began calling the Korea-U.S. alliance a “linchpin,” Yun pointed out.

Yun said it is a challenge for the Park administration to find an amicable and delicate balance in its diplomacy with the U.S. and China.

Prof. Sheen Seong-ho of Seoul National University’s Graduate School of International Studies said the strategic importance of Northeast Asia - and particularly the Korean Peninsula - has grown more important than ever for the U.S.

“Over the past 60 years, the top priority of U.S. foreign policy was Europe and Asia was only secondary,” Sheen said. “U.S. troops only came to Korea because of the Korean War. Because of the Soviet Union during the cold war, Europe was the top priority in the past, and after the Sept. 11 terrorist attacks, the priority was shifted to the Middle East.”

With the rise of China, the strategic value of the U.S-Korea alliance became undeniably important for Washington, Sheen said. “Korea’s prestige in the international community has improved significantly militarily and diplomatically. And with Japan’s influence shrinking recently, the United States needs Korea’s role in the region.”

In a recent forum of the East Asia Institute, Scott Snyder, director of the Program on U.S.-Korea Policy at the Council on Foreign Relations, and a group of experts in Korea discussed the future of the 60-year-old alliance and urged the Park government to raise its voice in redefining its ties with the United States.

“Considering administrations starting anew in the United States, China and South Korea, Snyder and the discussants agreed that the new Park administration should take the lead in implementing the rebalancing strategy according to its own needs, as well as promote more creative policy agendas that take into account the new multilateral architecture,” according to the summary of the forum on March 29.

“Such an approach from South Korea toward the rebalancing strategy will raise an awareness of a stronger middle power that embraces the Asian identity rather than one that merely abides by the superpowers’ hegemonic objectives.”

The experts also said North Korea’s security threat is another important factor that will define the future of the South Korea-U.S. alliance. Bolstering the alliance further plays a key role in deterring the North, they said.

“The United States wants South Korea to play a bigger role with the alliance on regional and global issues,” Sheen said. “It may sound nice to hear, but in fact, the United States wants us to shoulder more burden because of its economic hardships. From our point of view, the North is the biggest security threat, and our economy is also not very stable. It will be very difficult for us to say that we will do everything they want. Finding a balance in this delicate situation is the difficult task for both countries’ politicians.”

Yun of the Korea National Diplomatic Academy also said the alliance is a key to deterring the North’s threats.

“The governments, the political communities and the people of the two countries are all talking about the possible delay of the wartime operational control handover because of the North’s provocative actions,” said Yun. “It is a crucial part of the alliance, and we must remember that maintaining the combined readiness for the two countries against the North is the strongest deterrent power.”

Regarding some politicians’ arguments that South Korea will need to seek an alliance with a “more equal footing” with the United States, Sheen said those arguments are outdated thinking.

While the alliance has contributed to South Korea’s political and economic rise from the ruins of the war, Sheen said demanding an equal relationship is simply unreasonable.

“The focus for the future should be on respect,” he said. “The United States and South Korea are countries with two different sized economies. How can they ever be equal? Demanding the equal treatments is [an attitude] coming from an inferiority complex.”

He said Korea should accept the reality and gain the most from the alliance. “If the status of forces agreement is unreasonable, we can revise it,” Sheen said. “We can use diplomacy to resolve the differences and upgrade the alliance.”