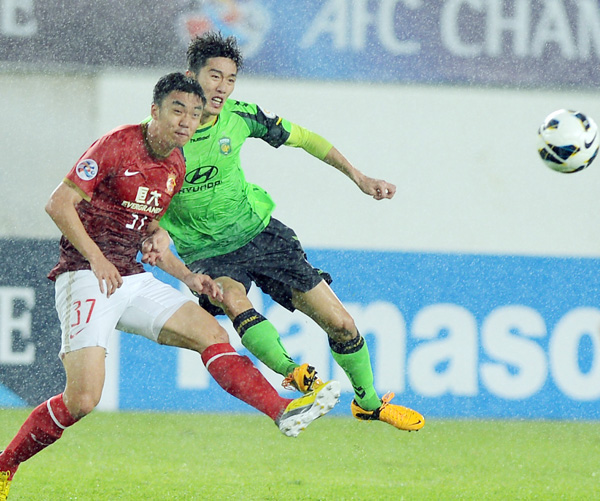 Two of last season’s best K-League Classic teams will continue Korea’s defense of an Asian title after the two of this season’s best teams were knocked out in the first stage.

The Jeonbuk Motors, the 2012 K-League runner-up, advanced to the round of 16 in the Asian Football Confederation Champions League after a scoreless draw at Guangzhou Evergrande of China on Wednesday night.

The Urawa Red Diamonds of Japan tied with the Motors at 10 points after a 1-0 win over the Muangthong United of Thailand in Seoul on Wednesday, but Jeonbuk was ahead in goal difference.

The Evergrande finished first in Group F with 11 points.

FC Seoul, the 2012 K-League champion, won Group E after a 2-2 draw with the Buriram United of Thailand at the Seoul World Cup Stadium on Wednesday.

Already securing a berth to the second round last week, Seoul collected 11 points from six games. Buriram got the other berth, beating Jiangsu Sainty of China on goal difference despite the Sainty’s 2-1 victory over the Vegalta Sendai of Japan in Sendai on Wednesday.

The Pohang Steelers, who are currently leading the domestic league, were shown the door on Tuesday, after the Suwon Bluewings, who are trailing the Steelers by three points, suffered a knockout last week. The Steelers finished third in Group G, while the Bluewings finished last in Group H.

The 2012 ACL also saw two of four K-League clubs reach the round of 16. One of the two clubs, Seongnam Chunma, lost in the first knockout stage, but the other team, Ulsan Hyundai, went on to claim Korea’s third crown in four years.

The Motors will seek revenge on the Kashiwa Reysol of Japan when they meet in the round of 16 of the 2013 ACL. The Reysol routed Jeonbuk, 5-1, and 2-0 in the group stage last year.

The Japanese club is not an easy opponent this year. It collected a formidable 14 points in Group H, double the runner-up, Central Coast Mariners of Australia. Jeonbuk and Kashiwa will play the home and away games on May 15 and May 22.

Seoul will play with the Beijing Guoan, the Group G runner-up. Seoul will travel to Beijing on May 14 and then host the Chinese side on May 21.

“I felt through the games with Jiangsu that Chinese football is developing rapidly,” Choi said. “We need a thorough preparation.”

At Seoul World Cup Stadium, Seoul took the lead ?twice, but Buriram responded to each ?goal in a minute. Jung Seung-yong put Seoul on the scoreboard in the 55th minute, but Ekkachai Samre leveled in the 56th. Another Seoul striker, Kim Hyun-sung, gave Seoul a 2-1 lead in the 74th, and Theerathon Bunmathan struck an equalizer in the 75th to secure a much-coveted point for the Thai side, which advanced past the ACL group stage for the first time.

“I am giving the applause of celebration to Buriram, who reached the round of 16 for the first time,” Choi said. “We tried to win the game tonight, but couldn’t do it. The players did their best, though.

“We will supplement the mistakes in the today’s match and will try not to repeat it in the next match.”