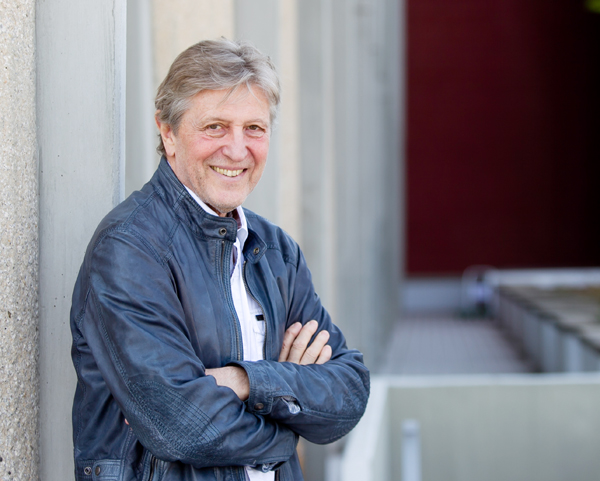 ANDREI SERBAN Current post :Professor of theater at the Columbia University School of the Arts Outstanding career achievements, : - Directed “Fragments of a Greek Trilogy” at La MaMa Experimental Theater Center and has won several Obie and international awards - Directed Aeschylus’ “Agamemnon” and Chekhov’s “The Cherry Orchard” at New York’s Lincoln Center, and the latter won a Tony Award for Best Revival. - Directed at the Public Theater, Yale Repertory, the Guthrie, Circle in the Square, Delacorte, San Francisco’s A.C.T., the American Repertory Theater in Cambridge, the Royal National Theater in London, Schauspielhaus Bochum and the Comedie Francaise in Paris, among many others - Acted as general director of the Romanian National Theater and has staged operas all over the world

Andrei Serban, a Romanian-born American director known as a major name in 20th century theater, last visited Korea in 1997 to stage “The Trojan Women” with the La Mama Experimental Theater Club from New York, an avant-garde company founded in 1961.

Although the theater group and Serban toured more than 30 countries with the tragedy by the Greek playwright Euripides, the 70-year-old director says the most memorable production of his more than 40-year career was during his first visit to Korea.

The play requires the audience’s participation as they don’t sit in their seats but move with the actors during the play. As the play is done in ancient Greek without subtitles, Koreans must understand it in their own way.

“This production was very unusual for Koreans. It was done in ancient Greek with no subtitles, and it was done in a way in which it was totally unconventional,” said Serban. “But it made them just feel and receive the emotion of the Greek tragedy drama so powerfully that they were totally satisfied with it the moment they received it. They understood not in their heads but in their solar plexus, the stomach, the intuition, which is the best understanding,” he said, adding that he can’t forget how “enthusiastic, energetic and sympathetic” the Korean audiences were.

“I think that the impression we had from this experience in Korea is that the Korean audiences are very sensitive and very intelligent. We staged ‘The Trojan Women’ in 30 different countries, and we think that Korea was one of the most wonderful receptions we have received in the world.”

Serban returned to Korea on Monday to stage “Cries and Whispers,” a remake of a movie by Swedish director Ingmar Bergman, with the Hungarian Theater of Cluj. It is the first part of this year’s International Invitational Program for the National Theater of Korea. Before kicking off the four-day series of performances yesterday, the Korea JoongAng Daily took the time to interview Serban on Tuesday.

Q. You seem to prefer works that are intimate with smaller audiences and require participation from the audience.

A. In this point of my life, after I’ve been working in the operatic houses all over the world for the very large audiences, I felt the need to do theater that is very intimate. My feeling was and is to reach an audience and to touch an audience in such a way that they are not only receiving the performance but they are somehow obliged to participate and obliged to be experiencing what the actors are experiencing as well. So there’s no curtain between the actors and the audience. The actors and the audience suffer together through the problems and life difficulties that arise in the plays. So far I did three productions this year, and they all required very intimate audience theater. All three plays share a common denominator of forcing the audience to participate and not to passively watch something in which at the end you say “I liked it” or “I didn’t like it.” You can not do that because you are forced to be part of it. You are forced to react.

Director Andrei Serban and the Hungarian Theater of Cluj bring “Cries and Whispers” to Seoul. The show is a remake of the movie with the same name that takes place within one red room. Above are the scenes from the play. Provided by Biro Istvan

I don’t think there’s an ideal audience size for a play. It doesn’t always have to be small and intimate. What is your opinion?

You are back in Korea for the second time. Why with “Cries and Whispers”?

It’s one of my favorite films of my all time. The film takes place in one location. It is within the walls of a big house in which the walls are all painted red. Bergman asks his cinematographer to photograph the movement of the soul. I say it’s one of my favorite films because the cinematographers succeeded in filming of the expression of the soul - the movement of the soul. It touches something like music touches us. It goes beyond what’s called the rational, the logical. It touches into the subconscious.

This was very difficult to put it onto a stage. In the film, the close-up is possible, but in the theater, how can you show the movement of the soul to something so profound and so difficult to explain in a way that is convincing. So together with Daniel Dima, with whom I wrote the adaptation together, we took sequences from the autobiography of Bergman, “The Magic Lantern,” and we referred to the way Bergman worked with the actors during the filming of the movie “Cries and Whispers.” So what the adaptation is in a way is Bergman rehearsing before filming “Cries and Whispers” with the actresses. That’s the story of our play. So it’s a play within a play, a movie within a movie.

Moreover, the story is extremely simple. There are three sisters and one of them comes to be with the dying sister and stays with her to spend the last moments of her life. And there’s another character, who is the caretaker, who is there to assist the sick. But within this total simplicity, we can feel the extraordinary, complicated relationship that happens between family members, which is the desire to communicate, the desire to love, the desire to feel that you are a good human being and somehow the difficulty to accomplish these desires. How difficult it is to be a good human being, how difficult it is to love, how difficult it is to ask for forgiveness at the moment of someone’s death. What the movie and hopefully the play does is touch us in a way that we can all recognize ourselves with all our desires towards fulfilling our wishes of relating to each other to fight our own loneliness, to fight our own inner misery and somehow the impossibility to really reach something so wonderful as that.

Although the play is a play of extraordinary sadness and tragedy, in the filmmaking of it what was so touching was that Bergman talks to the actresses. Because the play is so powerful and tense, they have the most extraordinary amount of laughter and comedy. They are laughing like crazy.

Another very luminescent aspect is at the end of the movie, although the sister that dies, dies, but even after she dies, she is still in need to have the other sister to relate to her even after her death. The very last two minutes of the film are this most beautiful Garden of Eden-like image in which everyone reconciles. All the women are in white dresses and they go into this garden, they sit in this swing and they are enjoying this peaceful moment in the afternoon sun. So what this says to me is that any tragedy, any story that is very sad can have at the end a resolution that is luminous, that is positive. And that’s very beautiful. It shows that somehow, there’s something at the end that leaves the spectator with an uplifted feeling, something good, a hope, not a stupid hope but the hope that somewhere, maybe in another world, reunion and reconciliation are possible. That’s what touched me deeply.

You’ve worked for more than 40 years as a director. When you work with actors with great talent, do you give them a lot of freedom to explore their own skills?

When I was young, I was much more of a dictator. I wanted everybody to do what I wanted them to do and to submit to my style of directing. But with time, I understood that actors are also artists. They also have their own intelligence and their own ideas. So I am more open now.

I always try to find actors who I have the same kind of vision. We are all searching together for an answer. What is the theater? What does theater mean today? How can theater make a bridge with the audience? What makes theater alive today? Why do we need theaters today in this world of technology and mass media and television screens? Why do we need this form of live communication? And if I find people as interested in these questions as I am, then we can go a long way. And I am still searching for the answers. After 40 years of working for theater, I have many more questions than I have answers. If one has more questions, I think he can be more creative than one who has answers to the questions. If you already have answers, there’s nothing else after that. But questions keep you curious like the curiosity of a child to find something new and something fresh.

I heard that you will direct a program from the National Changgeuk Company of Korea to reinterpret “Heungbuga.” How are you preparing for it?

I am very flattered that the National Theater of Korea thought to invite me, who comes from such a different culture. But for the moment, I have to find a way in which I make this story familiar to me. Right now, it’s very foreign, and very far away from me. If I find this connection with the story so that I have creativity and imagination to make it into a new way, a more original way, I will be more than happy to come and work in Korea. But if I don’t find this bridge then I will have to say maybe next time because I have to understand what in me is inspired by this story. Because as an artist, you cannot create something unless it really touched yourself. So right now, I remain with a question mark. Can I do this? You see, I love questions. And the answer is, I don’t know yet.


“Cries and Whispers,” which is only open to those 18 and over, kicked off at the Haeoreum Theater of the National Theater of Korea yesterday and will run to Sunday. Tickets are 70,000 won. English and Korean subtitles are provided. For more information, call (02) 2280-4114.