Roland Emmerich brings his latest round of destructive chaos to Seoul

Roland Emmerich brings his latest round of destructive chaos to Seoul 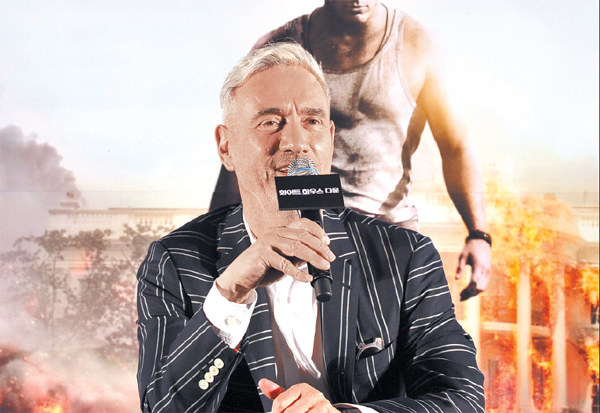 He’s brought us “Independence Day,” “The Day after Tomorrow” and “2012,” and this summer, the master of chaos and destruction Roland Emmerich is back with a new film to keep the audience squirming as they witness the White House going down.

Although not a household name like some major Hollywood players, the titles of his works are known worldwide, having tapped into the fear of many.

Born in Germany, the 57-year-old director has been heralded as “Das Spielberg aus Sindelfingen (South German dialect for “Little Spielberg from Sindelfingen”), and with an array of disaster-themed films that have grossed more than $3 billion worldwide, Emmerich has cultivated a unique style. He is most noted for destroying famous landmarks around the world.

His upcoming film, based on a screenplay by James Vanderbilt, is not about aliens or natural disasters, but a bunch of flesh and blood rebels.

The plot revolves around a Capitol policeman who must save his daughter and the president as invaders attack the White House.

The aptly titled film “White House Down” stars Channing Tatum and Jamie Foxx and is set to hit theaters next month.

To promote the flick, Emmerich touched down in Seoul for the second time to talk about his expertise and latest goals. With more than five million Koreans having viewed his hit “2012,” Emmerich broke the ice yesterday by saying that he was glad to see that “everything’s still standing.”

He then continued to discuss his latest creation.

“It’s an action movie. Since ‘Universal Soldier,’ I haven’t done a straight action film, but it’s a different kind of action film,” he said.

And if that wasn’t enough, he said that the film was interesting because it was “Americans versus Americans.”

It was also produced in just 14 months, but despite the short time period and other commitments, Emmerich said that when Sony Pictures handed him the script for “White House Down,” it was a no-brainer.

“I read the script [and] I decided to do it because it was one of the best scripts I’ve ever read,” he explained.

Fans can still expect plenty of CGI and action in the new flick, but Emmerich said that the film was “much more intimate” than “2012” and had a greater focus on the characters, namely the U.S. president (Foxx) and the policeman John Cale (Tatum).

“After meeting Channing Tatum I stopped looking,” the director said. The actor reportedly volunteered to do nearly all of the stunts from the film.

“When I brought up Jamie Foxx on who should be president, Channing Tatum got really excited. We were both fans of Jamie Foxx, and we thought he’d make a great president,” said Emmerich.

Foxx is a close friend of U.S. President Barack Obama, according to Emmerich, but he went out of his way not to impersonate the real deal.

At times criticized for being “too patriotic” toward his adopted country, the German-born filmmaker said that the reason for basing most of his films in the United States was simple.

“They give me a lot of money,” joked Emmerich. “I live in America, I grew up with American films, and I’m just trying to reflect what’s around me.”

And through his portrayal of life and disastrous events, he said that he always tries to make the plot relatable to a worldwide audience.

“This message is that America is deeply divided, if it keeps being divided, terrible things could happen,” said Emmerich.

Emmerich also said that he would work hard not to be pigeonholed as “that director” who does disaster films despite his unquestioned success in the genre.

“You still try to spread your wings. ... I’m a big fan of sci-fi movies [and] I hope I’ll find sci-fi movies that I can make,” he said, even if it means taking a break from blowing things up for a little while.