Manufacturing revs up in April

Manufacturing revs up in April 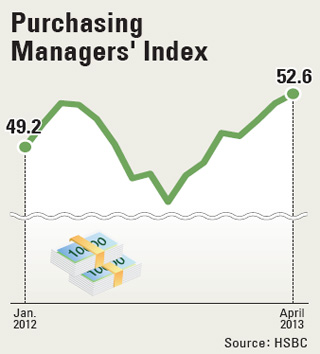 Amid ongoing concerns about the country’s sluggish economy, an HSBC report showed yesterday that manufacturing activity reached a 25-month high in April.

According to HSBC, the Purchasing Managers’ Index (PMI), which gauges business sentiment in the manufacturing sector, reached 52.6 last month, the highest in over two years. The index was 52 in March.

The PMI is based on a monthly survey of purchasing executives in manufacturing companies on five areas: new orders, output, employment, suppliers’ delivery times and stock of items purchased. If the index is above 50, it means there is improvement in the sector. It is the second consecutive month the index was over 50.

“The April PMI is positive for Korea’s economic outlook, following the stronger-than-expected first-quarter GDP,” said Ronald Man, an economist at HSBC in Asia. “With a fiscal stimulus in the pipeline set to keep domestic demand firm, we believe Korea remains on track to post a meaningful recovery in 2013.”

Last month, the Bank of Korea announced that Korea’s GDP grew 0.9 percent in the first quarter. BOK Governor Kim Choong-soo and the Ministry of Strategy and Finance had predicted growth of 0.8 percent and of 0.4 percent to 0.5 percent, respectively.

HSBC data showed the volume of manufacturing output in Korea grew in April on the heels of the previous month’s increase. “Growth was solid and the highest seen for a year, as a wider improvement in economic conditions led to a similar rise in new orders,” said the report. Export sales, meanwhile, also increased and there was growth in employment mainly to meet higher production requirements and respond to labor shortages at plants, according to HSBC.

“April’s survey signaled that staffing levels rose for a fifth successive month, and at a solid pace,” the report said.

“Taken together, further strengthening in Korea’s manufacturing conditions support our call that the monetary easing cycle in Korea is over,” said Man

Last month, the monetary policy committee of the Bank of Korea left the key interest rate unchanged at 2.75 percent for the sixth consecutive month. The decision came despite government pressure on the central bank that it should lower the benchmark rate and cooperate with its fiscal stimulus policy, which includes a supplementary budget.