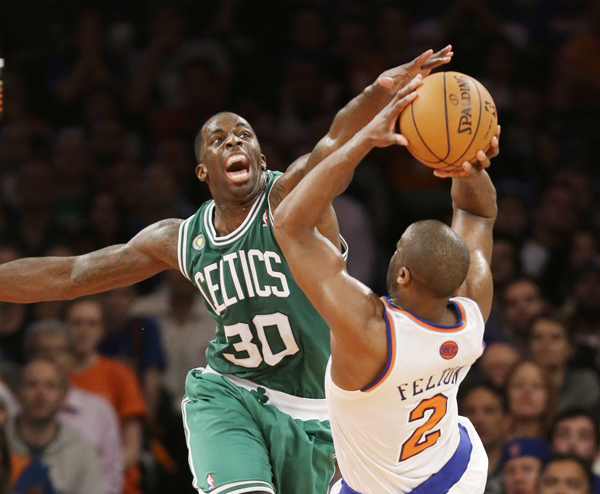 NEW YORK - Back in the series, now back to Boston.

The Celtics are two victories from NBA history, and from extending the Knicks’ postseason futility in a most improbable manner.

Kevin Garnett had 16 points and 18 rebounds and the Celtics stayed alive in the playoffs, cutting New York’s lead to 3-2 with a 92-86 victory Wednesday night.

The Celtics will host Game 6 on Friday night, needing two victories to become the first NBA team to overcome a 3-0 deficit to win a series.

“We’re still down. Our mentality has to be all-out,” Garnett said. “It can’t be anything [else].”

Brandon Bass added 17 points, steadying Boston as it shook off an 11-0 deficit and pulled away in the second half to stop the Knicks again from achieving their first playoff series victory since 2000.

“We didn’t panic and that’s something we’ve done, but we didn’t,” coach Doc Rivers said.

“I thought once the game got back to that five, six area, our guys were good again.”

J.R. Smith, back from his one-game suspension for elbowing Jason Terry with the Knicks way ahead late in Game 3, missed his first 10 shots and finished 3 of 14 for 14 points.

Terry also scored 17 off the bench.

Jeff Green scored 18 points and Paul Pierce had 16 as he and Garnett, the two franchise stalwarts, extended this season - and perhaps their Celtics careers - at least one more game.

“Obviously being down 2-0 or 3-0 or whatever it was, we could have folded shop. Nobody in here is going to quit,” Terry said.

Carmelo Anthony scored 22 points but was just 8 of 24 in another dismal shooting night for the Knicks, who blew a big lead in this game and now the series.

They face an unwanted trip back to Boston instead of the rest this aging roster could surely use before the second round.

If they get there.

“I think we’re fine,” Knicks coach Mike Woodson said. “Sure, we would’ve loved to close it out and move on, but nobody said it would be easy.”

The Knicks would host Game 7 on Sunday.

The Celtics were the first of the eight NBA teams that have come from 3-1 down, beating Philadelphia in 1968, and put themselves on the short list of teams that have erased a 2-0 deficit the next year in the NBA Finals.

So perhaps it would be fitting if they were the first to overcome 3-0.

“I think so. I mean, I think that would be wonderful, and someone’s going to do it and I want it to be us, obviously, since that’s the situation we’re in,” Rivers said before the game. “Someone will do it, and I really want to be a part of that.”

He’s still got a chance.