U.S. Ambassador Sung Kim points outs a message celebrating the 60th anniversary of the alliance between Korea and the United States at the embassy in Gwanghwamun, central Seoul. Provided by the U.S. Embassy

Despite continuing tensions on the Korean Peninsula due to threats from North Korea, economic ties between the United States and South Korea are getting stronger under the two countries’ 60-year security alliance.

Korean President Park Geun-hye’s visit to the United States from Sunday through Friday will be an opportunity for both countries’ governments to reinforce those ties as Park and President Barack Obama are expected to discuss economic issues, including improvements to the year-old Korea-U.S. free trade agreement.

When U.S. Secretary of State John Kerry visited Seoul last month, he highlighted the importance of economic partnership with Korea.

“I can’t think of a moment in 60 years when the relationship between the United States and the Republic of Korea has been stronger than it is today,” Kerry said.

He praised the Korea-U.S. FTA for making a real difference by creating jobs. “The difference is good jobs on both sides of the Pacific, some 17,000 jobs at GM Korea, 4,000 jobs at Costco, another 4,000 at ADT,” he said. “U.S. automotive exports are up 48 percent, and we’ve seen triple-digit growth in some of our agriculture exports - fresh fruit, nuts, juices - and it is a heck of a lot easier these days for Americans to buy kimchi in their local markets.”

The secretary of state’s visit was particularly significant because it came during a period of threats by North Korean leader Kim Jong-un.

“It is important to note that business continues as usual for [the American Chamber of Commerce and Industry] and its member companies,” said Amy Jackson, president of the American Chamber of Commerce and Industry. “We are confident the U.S. and Korean governments, in close cooperation with other allies, are fully prepared to deal with any situation and will continue to work to ensure peace and stability in the region.”

Back to 19th century

Economic ties between Korea and the United States date to the 19th century, and they have not always been smooth. In 1882, King Gojong, the second to last king of the Joseon Dynasty (1392-1910), signed a trade treaty with the United States to protect his country from being colonized by Japan. The treaty did not stop the Japanese from occupying the Korean Peninsula from 1910 through 1945, but it did sow the seed of bilateral cooperation.

The 1950-53 Korean War destroyed the South’s economy, causing an estimated $3.3 billion in damage and leaving Korea one of the poorest countries in the world. From 1945 to 1961, the United Nations contributed $3.1 billion worth of grants-in-aid, and the United States was responsible for 95.4 percent of that amount.

The two countries negotiated over the matter for six months in 1953 and 1954 but couldn’t reach an agreement.

President Syngman Rhee set up the first Economic Development Council and a three-year balanced growth strategy in 1960. The country’s first economic development plan, however, collapsed in the wake of a massive student movement on April 19 of that year.

The Park Chung Hee government came up with a Five-Year Economic Development Plan in 1961, but it was stymied by a May 16 military coup.

In the 1960s, the Korean economy was riddled with serious problems. The country was heavily dependent on grains imported from the United States while the agriculture sector was undergoing land reform. About 85 percent of the funds paid for grain was returned by the United States to Korea as aid. The remaining 15 percent went for scholarships to Koreans studying in the United States. 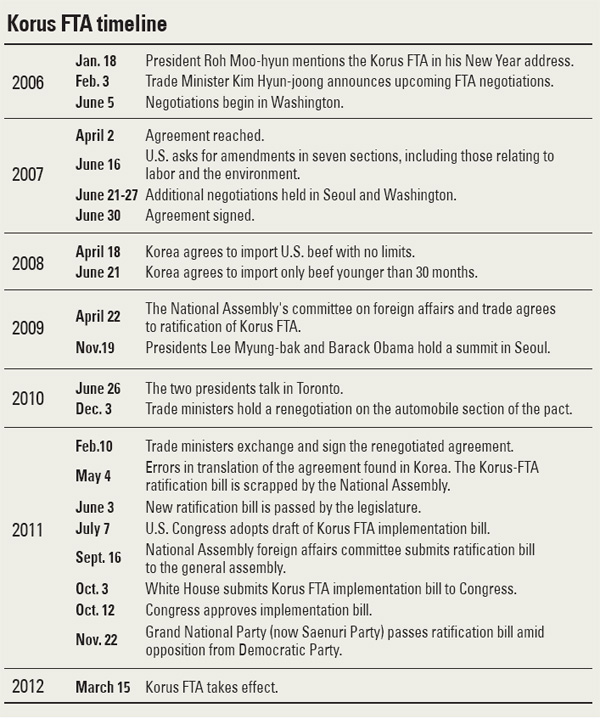 But American agricultural products sold for less than locally grown products, triggering economic stagnation in the countryside. The problem was made worse by the wave of people who fled rural areas fled for the cities. The new arrivals settled in urban backwaters and lived in severe poverty. This was the beginning of the country’s widening gap between the rich and poor. Excess labor in cities led the government to force people to work on government projects.

Then in 1963, the Five-Year Plan was executed for the first time, laying a solid foundation for the Korea’s 1965-79 industrialization and today’s position as the world’s 15th largest economy by GDP.

From their sometimes-turbulent early relationship, the Korean and U.S. economies have only gotten closer in the 21st century.

Since 2000, trade volume between the two countries has kept growing despite a global slowdown.

Active exchange of human capital also has contributed to the two allies’ solidarity. The Hyundai Research Institute report showed that about 690,000 Americans (520,000 of them tourists) entered Korea last year, up 50 percent from 450,000 in 2000.

Korean students studying in the United States also are on the rise, reaching 72,000 in 2012, making them the third-largest foreign student population after Chinese and Indians. Meanwhile, American students coming to Korea to study rose by 16 percent to 2,478 as of 2011 from 2,137 in 2010.

Economic ties reached a peak when the allies signed an FTA in 2011, the result of negotiations during the Roh Moo-hyun administration. It was implemented on March 15, 2012, by the Lee Myung-bak administration.

In the beginning, there was fierce opposition to the Korea-U.S. FTA from farmers which then spread to the general public during outbreaks of mad cow disease in 2008. The nation was swept by massive candle light vigils as people took to the streets in protest of U.S. beef imports.

Right before implementing the trade pact, another rumor circulated that the Investor-State Dispute (ISD) settlement clause in the Korea-U.S. FTA was unfair, sparking serious concerns about potential lawsuits by U.S. companies against the Korean government.

Despite the difficulties, reports from the government and research institutes concluded that the bilateral FTA has helped to shield the Korean economy against the global slowdown.

Korea maintained its position as the world’s eighth-largest trader with volume of $1 trillion last year, partly owing to the agreement, said a report by the Korea International Trade Association, or KITA.

According to the report, Korea’s exports to the United States expanded 1.8 percent to $57 billion from March 2012 to February. The country’s imports slid 9.4 percent to $41 billion during the same period.

Korea has maintained its position as the sixth-largest trade partner in the U.S. import market, occupying a 2.6 percent share. The front-runner is China, followed by Canada, Mexico, Japan and Germany.

Experts suggest that the two countries ramp up cooperation to tackle the current global slowdown and diplomatic issues by utilizing the FTA deal more wisely.

“The Korus FTA will make positive contributions to future relations between the two nations,” said Kim Hyun, a professor at Kyung Hee University. “What will be different from the past is that the future relations will be not only about security but more about economy.”

Choi Sung-geun, a senior researcher at Hyundai Research Institute, said President Park’s visit to Washington will help both countries assess the achievements of the Korus FTA so far and cement the partnership as the two presidents discuss future issues.

The United States is expected to push Korea to lift the ban on U.S. beef from cows younger than 30 months. However, opposition to U.S. beef remains strong in the country.

Pressures on the Korean government to fully open its service market are predicted to mount as the U.S. Trade Representative office said in a statement in January that it will embark on negotiations on service trade negotiations with 20 countries, including Korea.

“There are worries that the U.S. could file lawsuits against Korean goods ? like Samsung’s and Hyundai Motor’s - and the U.S. might enhance nontariff barriers against them,” Choi said.

Whether the two presidents revisit the ISD clause also remains to be seen. Last summer, U.S. buyout fund Lone Star announced it was filing an ISD suit with the Korean government for imposing taxes unfairly, and the issue made headlines again.

The United States also is likely to ask Korea to join the Trans-Pacific Partnership (TPP), the world’s largest free trade deal, being discussed by 12 countries, including Japan. Since the TPP is a higher level of free trade than the existing FTA, it could take more of a toll on Korean agricultural and service industries. At present, the Korean government isn’t considering participating in the deal.