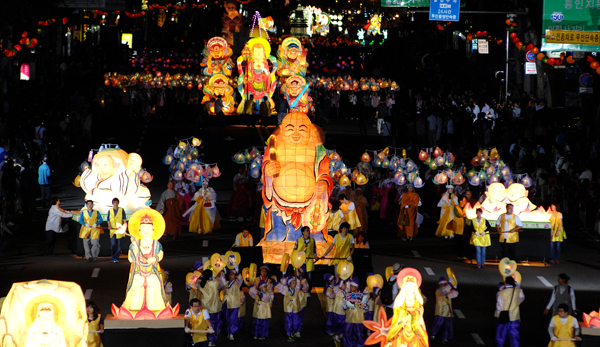 The lantern parade is the highlight of the annual lotus lantern festival, but the adoption of LED lanterns is a new addition. Provided by the organizer

It’s that time of the year again, when colorful lanterns of all shapes and sizes adorn streets nationwide, creating an exquisite scene that perfectly complements pleasant spring breezes and cherry blossoms.

And it’s all thanks to the Yeondeunghoe, the lotus lantern festival that Koreans can enjoy every year from early- to mid-May. It was originally aimed at celebrating the Buddha’s Birthday - which falls on May 17 ? but has evolved into an event that embraces all religions and ethnicities.

“Yeondeunghoe started as a Buddhist ritual, but now it’s become a cultural event for experiencing Korea’s traditions,” said Shin Yeong-jin, a publicist for the event. “This year’s event is different in that the lantern lighting ceremony took place at Gwanghwamun Square instead of Seoul Plaza, and that the Korea Tourism Organization got involved and attracted more foreign participants to take part in the temple stay, lantern-making and lantern parade programs.” 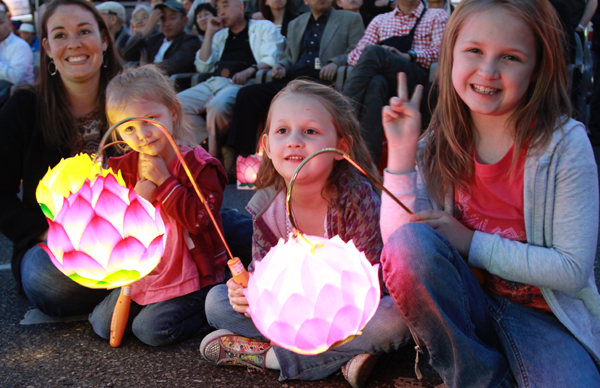 The festival usually attracts 300,000 participants, including about 30,000 foreigners. This year, 400 foreign tourists have been invited to participate.

It was on April 23 that the lantern lighting ceremony took place at Gwanghwamun Square for the first time. It has been held at Seoul Plaza for over 40 years. The 18-meter (59-foot) lantern made of some 3,000 pieces of traditional Korean paper, hanji, is modeled after Three-Storied Stone Pagoda at the Bulguk Temple - also known among Koreans as the Seokga Pagoda. The eighth-century pagoda is Korea’s National Treasure No. 21.

“Yeondeunghoe is now a lantern festival recognized by the world and that represents Korea, so we’ve decided to move the ceremony to Gwanghwamun Square, Seoul’s representative square, from the Seoul Plaza,” said Monk Jihyeon, a general affairs director at Jogye Order of Korean Buddhism and the executive committee chief of the Lotus Lantern Festival.

President Park Geun-hye, in her recent meeting with Buddhist leaders, also recognized the importance of Yeondeunghoe. “I believe cultural properties like Yeondeunghoe, Tripitaka Koreana, which is a Unesco World Cultural Heritage, temple food and temple stay programs that make our body and mind healthy are Korea’s great treasures,” she said.

Tripitaka Koreana, the most complete collection of Buddhist texts, was engraved on 80,000 woodblocks between 1237 and 1248 and is kept at the Haein Temple in Hapcheon, South Gyeongsang. 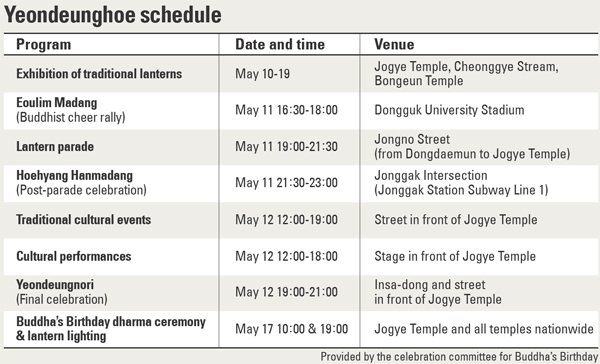 As usual, some hundreds of thousands of lanterns will light up during the festival, which runs from May 10 to 12 in various venues and forms, like exhibitions, performances and parades.

But what’s not usual is the adoption of light-emitting diode (LED) lanterns.

“We’ve decided to adopt the LED technology in the Lotus Lantern Festival this year, which would replace candlelight,” Monk Jihyeon told reporters on April 22. “Of the 100,000 lanterns that will appear at the Jogye Temple, streets of Jongno District and the downtown area, half of them will be LED lanterns and half of them conventional candlelight lanterns.”

“The reason we cannot change all the lanterns into LED lights is because conventional candlelight lanterns make better photographs,” Park Sang-hee, one of the managers of the preparatory committee, told Korean media. “But you will be seeing more LED lanterns at the festival in the future.”

The participation of foreigners is also more systemized this year.

The festival usually attracts 300,000 participants, and in the parade alone some 30,000 foreigners take part, which is why every year the organizers provide announcements in at least four languages.

This year, the organizers have recruited 35 foreign volunteers to help other foreign participants, while the Korea Tourism Organization has invited about 400 foreign tourists to participate in the festival.

According to the Jogye Order of Korean Buddhism - Korea’s largest Buddhist sect, the tradition of lighting lanterns came to Korea from ancient India.

Nonetheless, it has stayed in Korea and evolved in Korean-style over the past centuries as a festival which embody hope for a world that is brighter and free of dark troubles.

The oldest records regarding the lanterns are from the Silla Kingdom (57 BC-AD 935), which was known for its cultural and artistic achievements among the Three Kingdoms. In “Samguksagi” (“Chronicles of the Three Kingdoms”), written after the fall of Silla in 1145, there are two references to lanterns: one in 866 and the other in 890, in which the rulers visited Hwangryong Temple during full moons and “enjoyed lanterns.”

The “enjoying of the lanterns” became official festivities during the Goryeo Dynasty (918-1392), during which Buddhism was the national religion.

Records say that on the first and second moon days of the lunar calendar, the king and his people lit up lanterns, held festivals and enjoyed dance and wine.