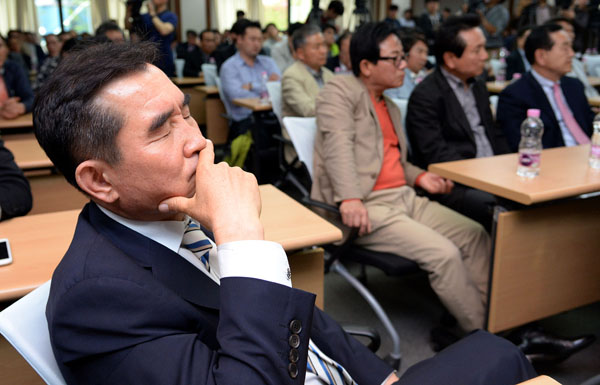 A businessman, left, looks exhausted at an emergency countermeasure meeting hosted by the Corporate Association of Gaesong Industrial Complex at the Korea Federation of Small and Medium-sized Businesses headquarters in Yeouido, western Seoul. The association yesterday has picked five co-chairs to come up with follow-up measures and seek business normalization in the aftermath of complete pullout of South Korean workers at the Kaesong Industrial Complex in North Korea. [NEWSIS]

The private financial sector will provide up to 700 billion won ($637 million) in emergency funds to companies with liquidity problems after the virtual shut down of the Kaesong Industrial Complex.

According to financial sources yesterday, the Financial Services Commission and Financial Supervisory Service have asked commercial banks, savings banks, insurance firms and card companies to help firms that withdrew from Kaesong by injecting emergency funds and extending the maturity periods of loans they hold.

South-North relations soured severely after Pyongyang’s missile launch and nuclear test last year, and tensions peaked with the near shutdown of the Kaesong complex. On April 9, North Korea pulled out its 53,000 workers at South Korean companies operating in Kaesong and blocked food and other materials from entering the industrial zone. The South Korean government then pulled out its workers, mainly worried about their safety and security after announcing it would close the complex.

Companies that opened businesses in Kaesong, meanwhile, have complained over the past month or so since their factories were halted that though financial support by the government and institutions is helpful, the best option would be to have the government negotiate with North Korean officials and resume operations at the complex.

On Wednesday, the government also decided to provide 300 billion won to companies in Kaesong from the policy fund.