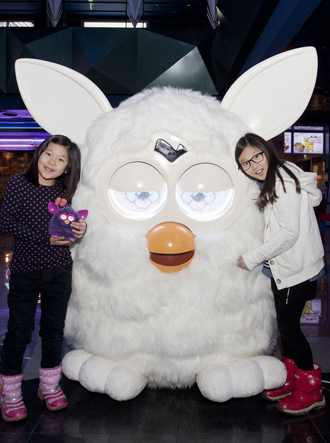 Children’s Day is just around the corner, and as with all other holidays, consumer products, items and trends change year to year.

Recently, the Furby talking doll is one of the most popular items among young girls. It has shaggy hair like a rag doll, and electronic eyes to express anger and joy. And it dances to claps and singing.

At first, Furby talks in an alien language, which can only be understood through the interpretation sheet. But as children keep talking to the doll, it learns the language, says such things as “You are a genius” or “Please tickle me.”

It is a robotic toy with strong interactions, and children can put them to sleep by using a smartphone app.

Boys are hooked on Rescue Tobot. Like characters in the movie “Transformers,” Tobot transforms from a car to a robot and is a character in a Korean animation series.

Lego got a big boost from its Ninjago series last year and remains popular this time around.

E-Mart is introducing the Lego Ninajago Gold Dragon at 39,900 won.

Homeplus presents the latest Lego series, “The Lone Ranger,” composed of a sophisticated locomotive at 19,900 won to 139,900 won. “The Lone Ranger” is the latest film starring Johnny Depp and directed by Gore Verbinski, who also directed the “Pirates of the Caribbean” series.

Due to Korea’s camping fever, gear for young children has also appeared at large discount chains. 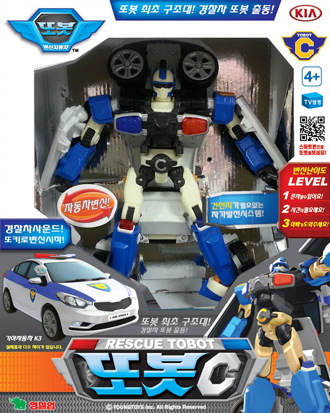 Homeplus has displayed some camping supplies decorated with Disney characters such as Snow White and Little Mermaid, as well as Iron Man. Tents and sleeping bags for children are 29,900 won each and camping chairs are retailed at 12,900 won.

The online shopping mall Interpark is selling a collection of experiential learning products instead of character toys, such as Growing Longtail Tadpole Shrimps at 19,900 won and a Full Set of Fish Tank at 9,400 won.

Five-star hotels have introduced events for Children’s Day at relatively reasonable prices. The Seoul Westin Chosun Hotel will hold a kids party at the Grand Ballroom from 11 a.m. to 9 p.m. tomorrow. There will be popcorn, cotton candy and ice cream, and children can play on a 15-meter (49-foot) long air bounce. Also on the docket are games, dancing and a visit by the popular animated caterpillar character Lava. Admission is 35,000 won for adults and children.

The Millennium Seoul Hilton Hotel will hold a pizza making party for children aged 12 and younger at its Italian restaurant, Il Ponte, from 11:30 a.m. to 2:30 p.m. Children will receive a chef hat and apron, and hotel chefs will bake the pizza. Places must be booked when making reservations for a meal for at least one adult.

The Imperial Palace Seoul Hotel will offer gifts and candy to all children and provide face painting in front of the fountain in the lobby.