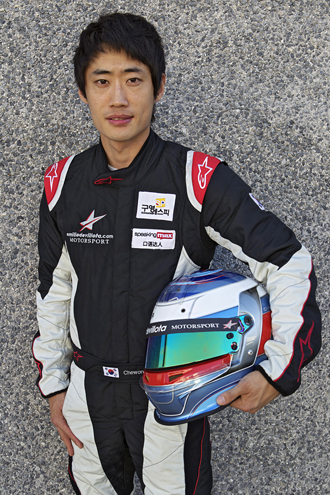 Korea is the world’s fifth-largest automaker and also host of the Formula One Grand Prix, but motor sports is a field few people care about. But for Im Che-won, motor racing is his “blue ocean,” in which his dreams are building on.

Im, who is with the Emilio de Villota team, was runner-up in the first round of the 2013 European F3 Open’s Copa Class, which was held at Circuit Paul Ricard in France last Saturday. He finished 13 laps of the 5.809 kilometer-circuit (3.6 miles) in 35 minutes, 52.314 seconds, which was 1.6 seconds slower than British winner Cameron Twynham.

This is the first time that a Korean driver stood on the podium in his debut stage at the European F3 Open.

“I’m happy that I made second place in my debut,” Im said. “I really want to thank everyone who supported me and believed in my future.”

The racing event is considered a steppingstone for young drivers to enter Formula One. Although all the cars are powered by Toyota engines, the event operated in two different classes - Class A and Copa Class - which are divided by chassis specification. Im competed in Copa Class, which is cheaper because the cars are equipped with Dallara F308 chassis that are slower than Class A’s Dallara F312 chassis.

The 2013 European F3 Open is set to be held until November with eight two-round racing events. It goes through countries like Spain, Germany, Italy, Portugal and Belgium.

The 174 centimeter-tall (5 feet 8 inches) Im said his first dream was to become a football player. However, following his parents’ wishes, he studied hard and managed to enter Seoul National University in 2004.

While studying mechanical engineering in one of the nation’s top schools, Im found another goal that replaced his dream to be a football player. He persuaded his parents, saying “being the best driver in Korea will be faster than being the best automobile engineer in Korea.”

Im began racing cars in 2009 and took the top position at a local racing event called Super Race in 2010. After receiving Korea Motor Sports’ Rookie of the Year in 2010, he moved to Japan in 2011 to race formula cars.

For Im, formula cars were a different world because he mostly drove passenger car-like box cars in the past. In his first five months, he crashed into a wall and was derailed from the circuit. Whenever he crashed, more than 1 million won ($910) was spent, but his driving skills were improving.

Im said he spent about 1 billion won competing in racing events in Japan and China. If he can’t find a sponsor this year, about 500 million to 600 million won will have to come out of his own pocket. But Im has a reliable financial supporter: his father.

“I didn’t know it would cost this much,” the 59-year-old Im said. “Some people say that I’m crazy, but anyone will act like me. My son is showing potential, but if I stop now, all of this becomes nothing.”

Just like any other drivers, the younger Im’s ultimate dream is to become a F1 driver. He knows this goal isn’t easy to achieve as his 29-year-old age is seen as a burden. But Im says he will not give up. Even if he fails to become a F1 driver, Im said he wants to coach Korea’s F1 team in the future.

“My dream is to enjoy a driver’s life without regret,” Im said. “With my precious experience as a driver, I want to contribute to the development of the nation’s motor sports industry.”