Officers are honored - after 24 years

Officers are honored - after 24 years 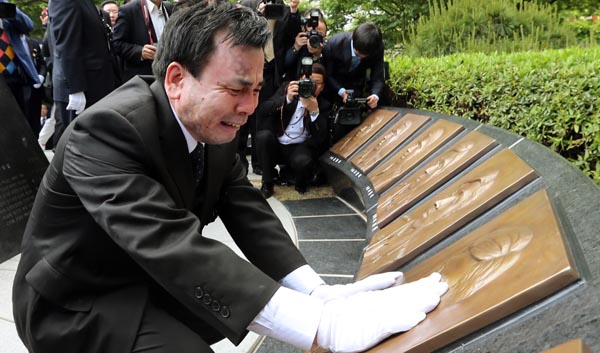 A relative of one of the police officers who died in 1989 bursts into tears yesterday touching one of the statues belatedly honoring the seven victims at a memorial service held at a plaza in front of the Busan Metropolitan Police Agency. [NEWSIS]

The National Police Agency yesterday dedicated statues to pay tribute to seven police officers who died in a fatal clash between riot police and college students in 1989.

But the memorial and its unveiling, which was attended by a large number of political heavyweights including Minister of Security and Public Administration Yoo Jung-bok, was an undeniably belated tribute to the law enforcement officers, taking 24 years to officially honor them.

“I am pleased to see the fallen police officers earn recognition and compensation, although it’s late,” said Minister Yoo before low-relief carvings of the face of each policeman at a square in front of the Busan Metropolitan Police Agency.

“The sacrifice was made during a tumultuous period but the government will honor all those who have died or been injured for the public safety and security of the country,” the minister said.

The delay was caused by the political sensitivity of the 1989 clash, which was later dubbed the Dong-eui University Incident.

The tragedy was touched off when a professor at Dong-eui University in Busan was found to be involved in a scandal related to cheating on entrance examinations in April 1989. Furious student activists staged a demonstration with firebombs. Physical clashes took place as the police tried to disperse the student’s rally.

On May 2, the confrontation escalated when the activists took hostage five police officers who had posed as activists to infiltrate the group.

The police staged an operation the following day to rescue their captive colleagues, who were held in the college library.

A fire broke out but its origin was uncertain. The five hostage policemen were freed but seven other policemen died in the fire.

Seventy-seven students were arrested. Some were sentenced to life imprisonment, some to seven years in prison.

But as time went by, the handling of the incident fluctuated depending on the ideology of the administration in power.

The late president Kim Dae-jung, a liberal Nobel Peace Prize recipient for his long-standing opposition to authoritarian rule, recognized the 46 arrested activists as contributors to the overarching democracy movement.

But the conservative Lee Myung-bak administration passed a bill to compensate the families of the dead police officers and 10 more police who were injured.

The ceremony yesterday was the culmination of that process.

“We finally managed to regain the honor that my brother deserves but it took 24 years,” said Jung Yoo-hwan, representative of the family of Jung Young-hwan, who died in the incident.

“The government should prevent this kind of negligence from ever happening again,” he said during yesterday’s event.

“Watching this statue, I am reminded of my uncle who always embraced me and my sister,” said Cho Min-ji, a nephew of the late Cho Deok-rae. “I feel like he has come back.”