Wanderers fail to move up to Premier League

Wanderers fail to move up to Premier League 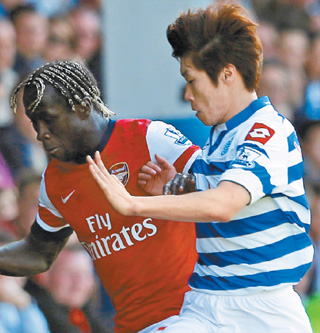 Korean footballer Lee Chung-yong failed to return to the Premier League as his club the Bolton Wanderers missed a chance to vie for promotion in the second division.

Bolton came from behind to draw its season’s final match against Blackpool 2-2 on Saturday, earning a point that tied Bolton with sixth-place Leicester City on 68 points but still couldn’t overcome a goal difference to grab a playoff berth.

The 24-year-old midfielder, who became the seventh Korean to play in the Premier League after signing with Bolton in 2009, has played in the Championship since the team was relegated after the 2011-12 season. He had five goals and seven assists for the team this season.

Hull City won automatic promotion to the English Premier League after a dramatic 2-2 draw with Cardiff City on an extraordinary final day of the Championship season on Saturday.

Steve Bruce’s side had to endure an agonizing wait as Watford - its only rivals for the second and final automatic promotion place - succumbed to a late 2-1 home defeat by Leeds United in a match delayed by around 15 minutes.

Cardiff, which had already earned promotion to the Premier League as champions, finished the Championship season on 87 points with Hull second on 79.

In the Premier League, Theo Walcott scored the quickest Premier League goal of the season after 20 seconds on Saturday to give Arsenal a 1-0 win at Queens Park Rangers and keep them a step ahead of rivals Tottenham Hotspur in the race for the Champions League.

In Germany, tempers flared as Borussia Dortmund and Bayern Munich drew 1-1 on Saturday in a Bundesliga match which was anything but a friendly warm-up for the Champions League final between the two sides in three weeks’ time.

Bayern, who had won its last 14 Bundesliga matches, had five players booked and fullback Rafinha sent off.