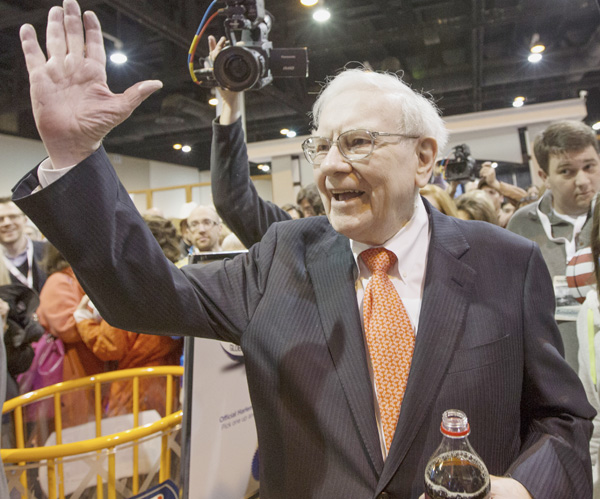 But that’s just how the faithful crowd of more than 30,000 who attended Saturday’s version likes it.

Getting the chance to learn about business and life from Berkshire CEO Warren Buffett and spend the day with like-minded investors made it worthwhile to brave Saturday’s cool, rainy weather in Omaha, Nebraska.

The level of appreciation shareholders have for Buffett becomes clear as he tours the meeting’s 200,000-square-foot (18,600-square-meter) exhibit hall each year.

Admirers held their cell phones and iPads in the air as they surrounded the billionaire Saturday morning. A pack of security guards created a buffer around Buffett as he visited displays selling Berkshire’s See’s Candy, explained BNSF railroad’s virtues and highlighted some of the company’s other 80-plus subsidiaries.

At the See’s booth, Buffett got a lesson in making hand-dipped bonbons. Then See’s manufacturing manager Steve Powell got Buffett to autograph his white uniform coat.

The Berkshire Hathaway annual meeting began humbly in 1982 with a crowd of 15 in an insurance company cafeteria. It has been growing steadily just as the company’s stock price rose to become the most-expensive in the U.S., reaching $162,904 for a Class A share on Friday.

Now the meeting regularly fills Omaha’s 18,300-seat arena and every nearby overflow room. Buffett likes to call it “Woodstock for Capitalists.”

It’s the one day of the year when the 82-year-old Buffett gets treated like a rock star while his friend Microsoft Chairman Bill Gates, who serves on Berkshire’s board, can wander through the crowd without much recognition.

Shareholder Larry Cundiff has seen a lot of change at the meetings since he started attending about 15 years ago. He said it’s hard to get within 15 feet of Buffett now.

“I met him once at a meeting in - I think - 1997,” Cundiff said. “I was sitting at a booth, and he just walked up and sat beside us in the next booth. He autographed a dollar bill for me. I don’t think he even had security then.”

The questions seemed somewhat tougher and more detailed because of the addition of a panel of investment professionals, including Doug Kass, who has a negative view on Berkshire’s stock.

But the bulk of the questions explored familiar themes, such as the future of Berkshire after Buffett and Munger are gone. The questioners also wanted to hear what the two men thought about the economy, the Federal Reserve and life in general.

Buffett said he thinks Berkshire will continue to thrive after he’s gone because the company’s employees and managers will resist any attempt to change the way it runs.

“The key is preserving the culture, and having a successor as CEO who is smart and energetic,” Buffett said.

The U.S. economy should continue growing at a steady pace just as it has since the fall of 2009, Buffett said, but the Federal Reserve’s efforts to stimulate growth are likely to eventually create inflation.

“We’ve encountered far worse problems than we face now,” Buffett said. “This is not our toughest hour.”

Not everyone at the meeting was applauding Buffett.

Outside, dozens of Utah coal miners picketed in the hopes of winning a better contract offer. A handful of environmental activists left disappointed after shareholders rejected a proposal to require Berkshire’s utilities to adopt goals to reduce greenhouse gas emissions.

Bernie Morris, of Price, Utah, stood in the rain to hand out flyers Saturday morning. The 67-year-old said he’s worked for the Deer Creek coal mine for 28 years, but fears he won’t be able to afford the monthly health insurance premium the company wants to charge.

But the protesters didn’t deter the thousands of people who came to hear Buffett and Munger.