Consumer agency clears the air on total expense of purifiers

Consumer agency clears the air on total expense of purifiers

When it comes to air purifiers, the old saying that “you get what you pay for” does not apply, according to a state-run consumer agency.

The Korea Consumer Agency tested 22 air purifiers made by six companies and found that cheaper products cost less in maintenance fees than more expensive one and perform just as well or better.

Among the five purifiers with coverage of 30 square meters (322.9 square feet) or less, the annual maintenance fee of Chungho Nais’s CHA-310BA, which was the second-most-expensive purifier tested, was the highest at 202,000 won ($184) per year.

But the product’s coverage area was the smallest at 17.6 square meters, and the consumer agency found actual coverage was less than that and reported the matter to the Korea Energy Management Corporation.

Kyowon’s 450,000 won air purifier, the KW-A02G1, was the most expensive purifier, but showed disappointing results in most test areas except for deodorization efficiency. Its annual maintenance fee came in at 184,000 won, second-most expensive, the test showed.

Despite its high price, area coverage was a mere 19 square meters and it was loud, according to the agency. 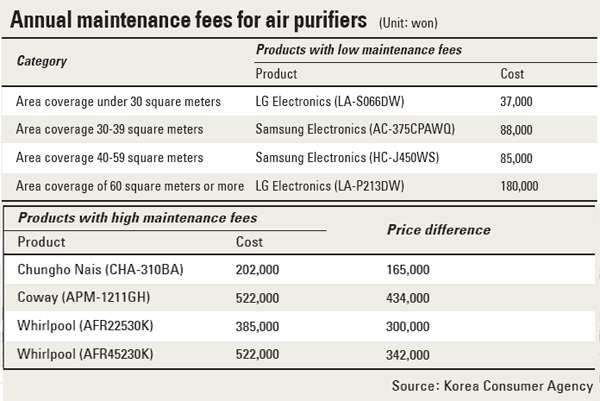 Annual maintenance fees include filter replacement and the most expensive maintenance among the tested products was nearly six times more than the least, the agency’s test showed.

“Various products are released in the market in tandem with the growing demand for air purifiers, but there is not a lot of information out there for consumers,” said an official at the Korea Consumer Agency. “To make a reasonable decision, [consumers are] advised to pick a product by comparing area coverage, maintenance fees, deodorization efficiency, noise and purchase price.”