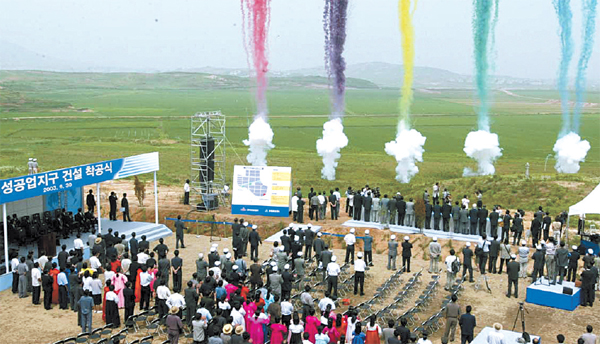 No other Korean company has as much at stake in the Kaesong Industrial Complex as Hyundai Asan.

And the horizon looks bleak for the operator of the 10-year-old complex, which has epitomized the economic cooperation possible between the two Koreas, after the North announced recently it would “tentatively shut down” the place.

Part of Hyundai Group, which is chaired by Hyun Jung-eun, daughter-in-law of the late Hyundai empire founder Chung Ju-yung, Hyundai Asan owns 35 billion won ($32 million) worth of assets inside the complex - ranging from a residence for its employees to gas stations, a duty free shop, a hotel and factories. The goods inside the duty-free shop alone are estimated to be worth up to 500 million won.

“The situation is deplorable given that we have been the leader of economic cooperation operations with North Korea for over 10 years,” said a Hyundai Asan spokesman. “We intend to mobilize every effort to normalize the Kaesong business.” The company recently established an emergency committee to come up with follow-up measures, including applying for the maximum 7 billion won insurance policy it has on the venture.

This is the second time Hyundai Asan has been dealt a massive blow in its business with North Korea. Five years ago, it lost the 760 billion won it spent building facilities in Mount Kumgang after North Korea, without discussion or mutual agreement, halted the tourism program Hyundai Asan had been running there. The North made the decision in the wake of the fatal shooting of a South Korean tourist at the resort by one of its soldiers for a still unknown reason.

Losses from the ending of the Kumgang business snowballed to almost 600 billion won over the past five years, which makes the entire Mount Kumgang loss almost 1.4 trillion won.

Neither of the two governments has compensated for any of the damage and the insurance policy of 5 billion for the Mount Kumgang project was “too minimal” to bother with, according to the company. North Korea is trying to earn money from the mountain and all the facilities built by Hyundai Asan by attracting Chinese tourists.

The Kaesong Industrial Complex dates back to October 2000, when North Korean leader Kim Jong-il proposed an economic cooperation project in the North Korean city only a few hours away from Seoul in a meeting with then-Hyundai Group Chairman Chung Mong-hun, husband of Chairwoman Hyun.

Founder Chung, who also went by the pen name Asan, held a special affection for North Korea because he was born in a region in Gangwon province, which now belongs to the North. His sons inherited different arms of his business empire, including Hyundai Motor Group Chairman Mong-koo and Hyundai Heavy Industries Chairman Mong-joon. Hyundai Group Chairwoman Hyun took over the leadership from her husband, who committed suicide in 2003.

The construction in Kaesong began in 2003 and the Kaesong Industrial Complex Management Committee opened in October 2004. Two months later, the first batch of made-in-Kaesong products with South Korean brand names started rolling off the production lines. The cumulative production volume from the complex surpassed $1.5 billion in December 2011.

The financial damages those companies are set to undergo is estimated at over 1 trillion won by the South Korean government.