Not Impossible Labs has a possible dream

Not Impossible Labs has a possible dream 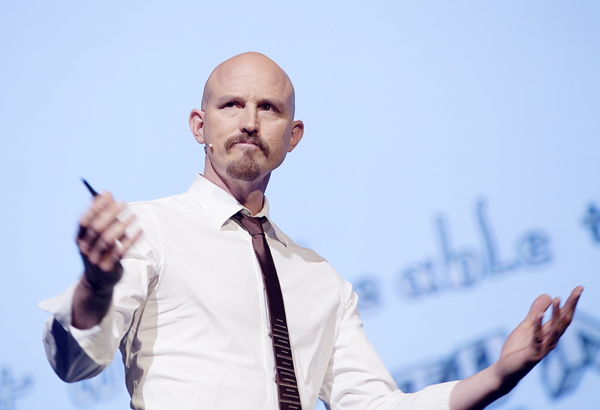 For Mick Ebeling, founder of the nonprofit Not Impossible Foundation, life is all about making impossible things possible - and not alone but as a community, using up-to-date technology and sharing individual resources.

“I would say that nothing’s impossible,” Ebeling said, in an interview with the Korea JoongAng Daily last week. “I think that to believe in the idea of the impossible is to question the process of humanity because everything at one point was impossible, like the pen and paper that we use, until someone made it possible. That to me is an incredible motivator.”

Ebeling, who is also the founder and chief executive of the Ebeling Group, a U.S.-based production company, was in Seoul last week to attend the two-day Seoul Digital Forum as a speaker. While attending the forum, Ebeling, 43, launched Not Impossible Labs, an open-source online community where anyone is able to sign up and contribute their skills and passions in creating an invention with a cause.

The idea of launching Not Impossible Labs all started with the invention of the EyeWriter, an eye-tracking device. Ebeling had come across the story of Tempt, a graffiti artist in Los Angeles who was paralyzed due to Lou Gehrig’s disease. Ebeling gathered scientists, artists and computer programmers to develop EyeWriter, which ultimately enabled Tempt to draw.

“The reason that I did what I did is because of the personal connection to his brother, and his father not being able to just sit back and watch someone who wasn’t able to communicate or talk,” Ebeling said. “I thought that was injustice, and that’s a right everyone should have: To be able to communicate. That’s how the project started.”

The process of developing EyeWriter was shared online on an open-source basis. Employees of Samsung Electronics developed a similar device called the EyeCan. At the forum, Ebeling sat down with five Samsung employees who took part in that invention and had a conversation.

“We were on stage together and I’m a huge fan of theirs,” Ebeling said. “It’s amazing how they took what we did and took it further. That’s the whole principle of what we’re doing: To have everybody in the open source world participate in taking something and making it better.”

Not Impossible Labs, which can be accessed through www.notimpossiblelabs.com, will enable people to create more inventions like EyeWriter to contribute to a good cause.

“Anyone can participate,” Ebeling said. “That’s the key here. It’s not about the scientists, it’s about anybody that has something to contribute.”

When asked about the language used in the open source platform, Ebeling said that eventually, he wants it to be in “every language” so that people can participate from all around the world. At the time of the launch, however, only English is available.

“What invention is going to come in from Saudi Arabia? From Chile? From New Zealand?” he asked. “[If not the Labs] I could never come up with that [such inventions]. There is an immediate ceiling in thinking about it, from having it self-generated and when we open it up, that ceiling goes away.”

The project is possible because of the Internet, which he calls the “global brain.”

One year from now, Ebeling said, he hopes to see numerous inventions being shared through the open source platform.