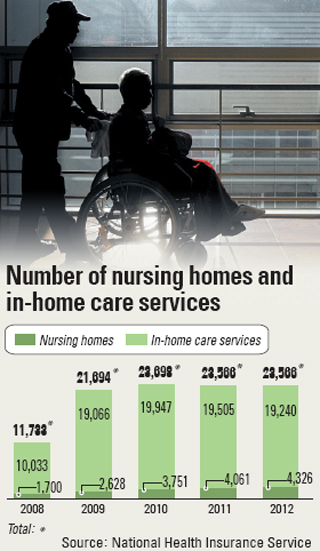 When Mrs. Ko, 45, decided to take her mother to a nursing home last year, she expected the facility to help her mother recover from an illness. Much to her chagrin, the mother’s health deteriorated after being in the facility. She even developed bedsores.

Ko questioned the staff and they admitted that cost-cutting measures had reduced staff and dragged down the nursing home’s level of services. They said there was only one nurse for every 20 residents and shift rotations had been almost abandoned at night.

Mrs. Ko brought her mother home. “After I learned about the conditions in that place,” she recalls, “I felt severely guilty.”

Care for the elderly is going downhill in Korea just when it is needed more than ever. The society is aging and Koreans are getting more and more used to sending their elderly relatives to nursing homes or calling in nurses to their homes. Most of the cost is covered by the national health system.

People aged 65 or older who need help with everyday living are covered by the long-term care insurance system. They pay only 20 percent of the expenses of a state-designated nursing home or 15 percent of in-house nursing care.

According to the government, some 300,000 Koreans currently use nursing homes or in-house care, much more than ever before although the government doesn’t have earlier statistics.

The problem is that the standards were lowered in 2007 to boost the number of nursing homes and providers of in-house care. That initiative worked a little too well. Now there are too many providers and they are engaged in cut-throat competition - which makes them lower their standards even further.

“Before they tried to implement the long-term care insurance system, there were only 300 nursing homes nationwide,” said Jang Ho-yeon, an official at the Ministry of Health and Welfare. “So, the government thought it needed to lower the standards in an effort to increase the number of service providers. It did and more private care centers opened up. Now, there are 4,300 nursing homes and 20,000 in-house care service centers. It would’ve been impossible if the government adopted strict qualifications.”

There are more than 4,300 nursing homes nationwide, and about 2,500 are private, for-profit facilities. Local governments operate 111 nursing homes while other entities including corporations and religious groups run more than 1,400, according to the Ministry of Health and Welfare.

In the case of in-house care, 15,000 out of 19,000 service providers are privately operated while the rest are managed by local governments or various groups.

The for-profit private businesses are more likely to go to greater lengths to cut costs and compete fiercely.

“Some facilities are advertising that their residents live there without paying any out-of-pocket expenses,” said Kim Hu-nam, president of Sang Rok Su Care Center in Daegu. “As a result, family members come to us and challenge us asking why we charge them fees, accusing us of cheating them.”

In general, the competition is leading to a decrease in quality across the board. To compensate for staffing shortfalls, nurses work longer shifts and overtime.

“A three-shift-work schedule is rare. We usually work 12 hours and sometimes 24 hours and take a day off,” says Suk Myung-ok, head of the Korean Care Workers’ Association which represents around 250,000 nursing home workers and home-care aides. “At night, one employee looks after about ten people. I know people are worried about poor conditions in the facilities, but it can’t be helped.”

In-home caregivers often do more than caring for the elderly such as household chores. The aides refer to themselves as “housekeepers with license.”

“When they offer home-care service, they are often assigned household chores,” said Suk, “And on some occasions, they even make side dishes for the old people’s sons and daughters.”

Competition keeps wages low, about 1 million won ($900) per month. That leads to high turnover in the industry, which leads to even poorer service.

The National Health Insurance Service is supposed to evaluate the quality of nursing homes on a scale of A to E based on metrics such as the number of staff and equipment.

“They say that they are evaluating them but it’s not easy,” says Suk Jae-eun, social welfare professor at Hallym University. “They are unable to regularly monitor how the centers operate on-site and the centers know how to get good scores,” she said. Apparently some managers add their relatives and friends to their staff lists to make them look more impressive.

“Measuring service quality needs qualitative analysis but it’s hard to objectively conduct a qualitative evaluation,” said a representative of the National Health Insurance Service. “There are more than 19,000 service providers, so it’s really tough to measure the quality of their service,” the representative said.

At a nursing home in Yangcheon District, one 80-year old resident knows the services are not up to snuff.

She keeps calling for help from a nurse but gets no reply. A bunch of muscle pain patches are scattered across her bed, and a lunch tray has not been cleared even though it’s after 5 p.m. “Whenever I tell the nurses that I’m sick, they just say it will be O.K.,” she says.