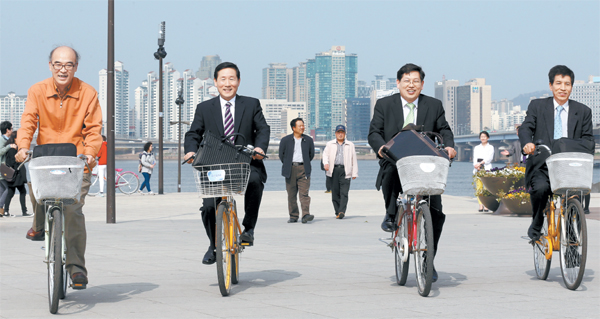 Four participants in the eight-day Career Transition School organized by the Korea Labor Foundation pose for a picture on April 17 at Hangang Park in Yeouido, western Seoul. By Kim Seong-ryong

Fifteen years ago, Kwon Ki-bong was let go from his job at a state-run corporation. Five years ago, his own company went bust. Ever since, he’s been looking for part-time work on construction sites but rarely finds it. Companies say that at 53, Kwon is too old to be a daily construction worker.

At the start of the year, Kwon wandered into the Korea Labor Foundation headquarters in Mapo District, central Seoul, to get a free cup of tea with milk and sugar to kill his hunger pains. More than four months later, Kwon is one of 20 unemployed baby boomers participating in an 8-day reemployment education program at the Career Transition School held by the labor foundation.

The program is partly a support-group for baby boomers who have lost steady jobs - and also lost hope in the future. By bringing a group together, the program hopes to shatter the participants’ feelings of isolation and give them some kind of inspiration to move ahead. The program late last month was the first of its kind by the foundation.

During an early session, participants are asked to describe the most memorable achievements of their careers. Looking back two or three decades, the no-longer-young company veterans start talking about how indispensable they once were in their places of work.

“You all remember the time when Daewoo Construction was undergoing a debt-workout program in 1998, right?” asks Huh Won, 56. “I went everywhere trying to land investments in the company as one of its employees.”

After hearing a few of the other’s life stories, Kwon begins sharing his.

Kwon lost his job at the state-run company in the late 1990s when the country was hit hard by the Asian financial crisis. He was confident he could start his own business. That worked for a while but when the 2008 global financial crisis hit, his business was a casualty.

A desperate Kwon indulged in drinking and betting on the stock market. His family soon disintegrated. Kwon is now all alone without a job. He relates a time when he was hungry and went to a free lunch center, but was too proud to go in.

“I found myself standing at the door. I couldn’t open it. I returned home.”

The 20 men’s testimonials go far over the allotted time for that day’s session. On the sixth day of the program, 17 of the men go to a job fair held at Coex in Gangnam District, southern Seoul. Each is dressed in a formal suit and has hope of opening a new chapter of life. They scatter around the companies’ recruitment booths with resumes and requests for job interviews.

Less than an hour later, 10 of them reunite. None have had any luck.

“Forget about an interview,” says Lee Byung-suk, 61. “I couldn’t even submit my resume because of my age.”

Lee Hei-bong, 54, sighs and says he feels “very sad to be regarded as too old for work.” Lee says he still needs to make a living to support his family.

Lee, who retired from a conglomerate last December, has two children. One is a college senior and the other a high school senior. “I have to provide care for them until they are ready [to make their own livings in society],” he says.

At the end of the eight-day program, all of the participants say that sharing their stories with one another helped them regain confidence and relieve anxiety that had been mounting without employment.

“Apart from anything else, just sharing our stories and understanding someone else’s struggle as well as talking about my own hardship has given me new strength and hope,” says Kim Jong-sun, 48, who worked as an IT system developer until being retired early this year.