State’s misdeeds in the past prove costly now

State’s misdeeds in the past prove costly now 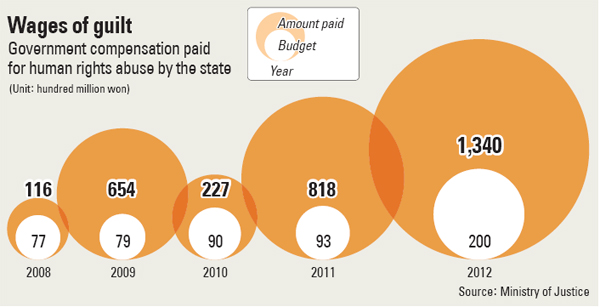 How should the nation pay compensation to victims of civic abuse or political violence in South Korea’s tumultuous past?

Late last month, the Seoul Central District Court ordered the Korean government to compensate 10 people falsely accused of plotting to overthrow the government of Park Chung Hee in late 1973 and early 1974. It ordered compensation of 6.7 billion won ($6.03 million) to their 92 relatives.

When Park’s rival Kim Dae-jung was kidnapped in Tokyo in August 1973, a series of anti-government protests calling for the end of Park’s dictatorship were staged by university students nationwide.

On April 3, 1974, the government said it investigated 1,024 members of the Federation of Korea Democratic Students on allegations of planning a large scale revolt to overthrow the government and establish a communist government from December 1973. The prosecution indicted 180 people, including Choi Kwon-haeng, a French professor from Seoul National University.

Some of the alleged leaders were either sentenced to death or life imprisonment and the rest were sentenced to prison, but most were released on Feb. 15, 1975 by a special presidential pardon.

Choi was sentenced to 10 years and served nine months in prison. The ruling last month awards his family 1.1 billion won of government compensation.

“The court’s ruling clearly reflects the nation’s stance over the history of the country’s pro-democracy movement,” Professor Choi said in an e-mail interview with the JoongAng Ilbo. “I think the ruling will comfort my family members, including my mother who became an aphasic when I was sentenced to 10 years in prison.”

The problem is that there isn’t enough money to pay out. According to the litigation division, 20 billion won was earmarked by the National Assembly for such cases the government loses this year, but 18.4 billion won has already been spent as of April. Most of the budget was spent in cases in which the government did something unlawful to people.

The situation was similar last year. The same amount, 20 billion won, was earmarked for the ministry’s litigation division but courts doled out compensation of 134 billion won in similar cases. It gets worse if the ministry appeals a case and loses because the government also has to pay interest from between the time a ruling is made and the compensation is paid. It generally takes a year for a final decree to be made by the Supreme Court.

“It may look like the amounts are huge because there are so many plaintiffs, but the actual amount that one person receives isn’t that much,” said attorney Lee Heon-wook, a member of the civic group People’s Solidarity for Participatory Democracy. “It is reasonable that people receive such compensations because their lives have been damaged badly by the government.”

“There is no doubt that the government looks back at the history of the past and regrets its faults,” said Koo Bon-seon, a spokesman for the Supreme Prosecutors’ Office. “But we need to reconsider if it’s right to spend hundreds of billions of won just in clearing up past affairs.”

The problem is that cases keep arising and not just from the days of dictatorship. Recently, courts have told the government to compensate relatives of people who were killed by the nation’s military or police during the Korean War (1950-1953).

On April 18, the Seoul Central District Court ruled that the government should pay a total of 1.5 billion won to 65 relatives of people killed by the Korean military and police.

From September 1950, when the South Korean government and its allies recaptured Seoul from the North, to early 1951, a total of 98 residents of Yeoju, Gyeonggi were shot to death for allegedly aiding North Korea.