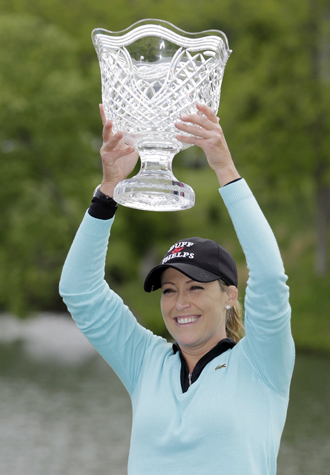 WILLIAMSBURG, Virginia - Cristie Kerr watched her short winning par putt fall on the second hole of a playoff against Suzann Pettersen, hugged her caddie, a few players who stayed around to watch and had one more hug she had waited a long time to give.

“Where’s my dad?” Kerr said during the celebration Sunday on the 18th hole at Kingsmill’s River Course.

Her dad, Michael Kerr, was on his way - as fast as his motorized cart would take him.

“I rarely get nervous when she plays,” he said. “I’ve seen the good, the bad and the ugly. This was the most nervous I have been. It wasn’t just the playoff. It was the last three holes. Honestly, I was in the bar drinking, which I don’t normally do.”

Kerr’s victory in the Kingsmill Championship, the 16th of her career and third in the event, was the first one with her dad present. A Vietnam veteran and career schoolteacher who has had both knees replaced, he stayed with her throughout her round, then took the cart to the bar, figuring he couldn’t maneuver well enough to keep up in the big crowd.

“For the last 17 years, I’ve been dreaming of watching her win a professional tournament,” he said. “It was a dream come true. If I never see anything else in my life, this was it and this was the best thing that’s ever happened to me.”

Kerr made it so with a refusal to lose, even when she failed to cash in on her best shot of the day, an approach on the first extra hole that left her with a 6-foot putt to win. It never even touched the cup, sliding by on the right.

“I wasn’t going to lose, not today, not with my dad here,” Kerr said.

She almost let the prospect of having the moment take it away.

“The second time, I was going to make sure, ‘O.K., I can think about that after. Let’s take care of what we’ve got to take care of right now,’?” Kerr said she told herself. ?