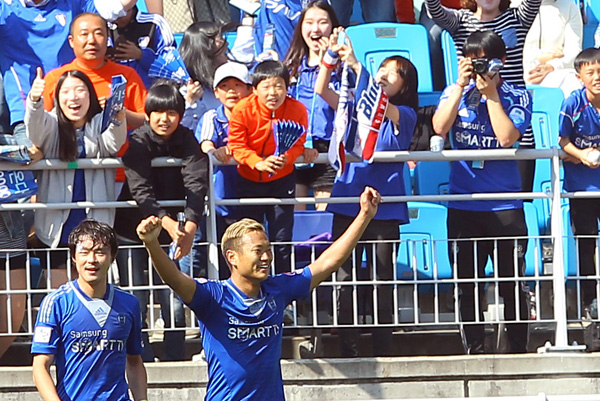 North Korean national team striker Jong Tae-se, below right, responds to cheers from home fans after he scored the 80th-minute winner ?for the Suwon Bluewings against the Incheon United at the Suwon World Cup Stadium, Sunday. [NEWSIS]

Unfazed by their first-stage exit from the Asian Football Confederation Champions League, the Pohang Steelers extended their unbeaten streak in the K-League Classic with a 1-0 victory over the Seongnam Chunma on Sunday.

The Suwon Bluewings, the other ACL dropout, brushed aside the Incheon United into second place with a 1-0 victory, thanks to the 80th-minute winner by North Korean striker Jong Tae-se.

At the Pohang Steelyard, Hwang Jin-sung celebrated his 29th birthday by scoring the winner in the 33rd minute, exciting over 15,000 fans who saw their club stay unbeaten for their past 10 games.

The Pusan Daewoo Royals, the predecessor of the Busan I’Park, had a 21-game undefeated streak in the 1991 season, while the Chunnam Dragons remained undefeated for 21 straight games in the 1997 season.

The Bluewings hold the record for the longest undefeated stretch from the opening of the season, which it set in 2008 with an 18-game run.

Hwang earned a goal chance after his own free kick near the Seongnam goalpost deflected off a defender. Kim Dae-ho took possession and dribbled down to the left-handed endline before sending it back to the midfielder, who fired a left-footer for his third goal of the season.

“My wife texted me a congratulatory message past midnight and encouraged me to play without pressure in today’s game. That helped a lot,” Hwang said after the victory, according to the Steelers’ Web site.

The Bluewings picked up their sixth victory of the season at home on Jong’s fifth goal of the season, which put the Japan-born player in fourth place in the scoring race. Kim Shin-wook of Ulsan Hyundai is leading with seven goals, followed by Dejan Damjanovic of FC Seoul and Pedro Junior of the Jeju United, both at six goals.

In a matchup between the two survivors of the 2013 ACL season, the Jeonbuk Motors beat FC Seoul, 1-0, at the Jeonju World Cup Stadium on Sunday. Lee Seung-gi, who scored the winner in the 53rd minute, turned from a hero into a villain after he was sent off for his goal ceremony in which he revealed his bare chest.

“I am relieved that the team won so that my mistake was just buried,” Lee told reporters after the game.

Meanwhile, 108,356 people visited the stadiums to watch seven games on Sunday, the fifth-largest crowd on Children’s Day in K-League history, according to the league.