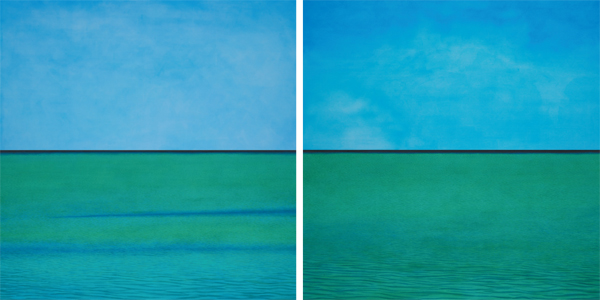 Two 3x3 meter paintings titled “Towards” (2013), depicting the sea seen from Jeju Island are part of Kim Bo-hie’s solo show at Hakgojae. Provided by the gallery

If you want to feel summer early, one way is to go to Hakgojae gallery in the art zone east of Gyeongbok Palace in central Seoul. An exhibition featuring paintings of green and blue tones that depict tropical plants and the South Sea starts tomorrow.

It is a solo show of veteran Korean artist Kim Bo-hie, who is based both in Seoul and Jeju Island. Her 19 paintings feature green plants with subtle differences and the emerald sea bordered by a calm horizon from the turquoise sky, scenes she has seen at the southern island.

As the plants in Kim’s paintings are overlapped without a sense of distance between them and as every leaf of them is portrayed meticulously, they would remind viewers of the French artist Henri Rousseau’s (1844~1910) famous tropical jungle paintings.

But they are somewhat different. Kim’s paintings depict close-up images of plants with a sense of oneness with nature, which is partly from the East Asian philosophy. She uses Asian traditional pigment for her paintings, while Rousseau’s paintings keep a distance from the tropical jungle, making it an exotic other world.

“The reason why the paintings of Kim Bo Hie are fascinating is because she constantly pursues poetic beauty within painting,” Huang Do, a Chinese independent curator and critic, wrote in a note for the exhibition.