Clockwise from left, customers talk at Doksuri Dabang, which reopened in January. Dok Dabang’s outer sign in 2005. Lettering on Dok Dabang’s new door. A message board where people leave posts to stay connected.

Popular trends keep on changing in ways to make life more convenient, such as the arrival of smartphones and other “smart” devices that made many people able to get things done on-the-go in the past decade or so.

But, after some time chasing cutting-edge technology, people have started to realize that they’re nostalgic for the things they enjoyed before the arrival of time-saving “smart” gadgets and how many things are sacrificed for the sake of convenience.

Such sentiments are creating a new trend in the northern part of Seoul, as many well-known landmarks that either disappeared or whose existence were threatened due to financial problems are making comebacks. This trend is often found in the Shinchon and Hongdae areas of Mapo District, northwestern Seoul, where big-name franchise companies have started to occupy the streets in the past decade as more people visit for leisure.

Dokdabang, a shorter name for Doksuri Dabang, which means eagle cafe in Korean, returned to the heart of Shinchon eight years after serving its last coffee in 2005.

It reopened in January on the eighth floor of the same building where it used to be. Despite being less accessible than other stores on the first or the second floors, the building owner says there has been a steady flow of patrons four months since the business reopened.

“Some people come to reminisce about their college life back in the days and current students come to build memories of their own,” said Sohn Young-duek, owner of the dabang, a term widely used in the 70s and the 80s to indicate coffee shops.

“I’m also amazed at people actually coming up to the eighth floor to be in this cafe, and for that I’m very thankful.”

The original cafe of the same name opened in 1971. It was known as a gathering place for artists to discuss literature and music, including novelist Sung Suk-je of the coming-of-age tale, “First Love,” and poet Ki Hyung-do of the posthumously-published poem collection, “Black Leaf in My Mouth.” Also, many students and faculty members from nearby universities were regular customers of the shop in the 70s and the 80s.

The previous owner of the cafe, Kim Jung-hee, who is Sohn’s grandmother, decided to close down the place after franchise coffee stores began surging into the neighborhood.

“It would have been a financial decision back then,” said Sohn, agreeing that it would have been hard to cater to customers who were intrigued by big-name international franchises such as Starbucks, Coffee Bean and Tea Leaf, and many others that expanded in Korea in the mid-2000s, while trying to stay in business. 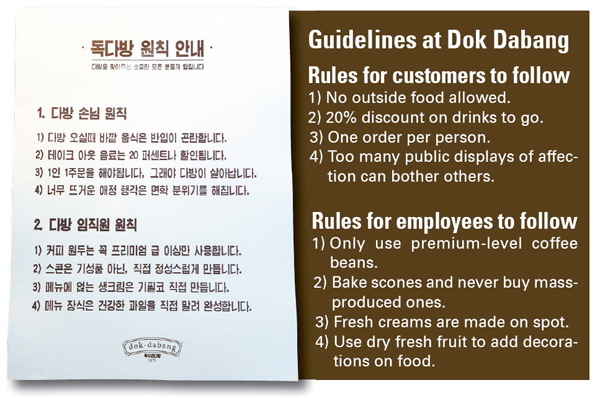 Although Sohn is ambitious about restoring the cafe to its former glory, he chose not to mimic the entire interior from the past, but simply juxtaposed some nostalgic items that remind customers of the old days.

For example, the menu and other notices are printed in a gothic font that was popular then. Another nostalgic item is the message board in the entrance, which was a major communication tool back when there were no cell phones or e-mail, as people set up meeting times by leaving notes there to stay connected.

Nowadays, the board carries somewhat different posts, like wish notes from alumni of nearby universities, including Yonsei University, hoping their children get into the school and enjoy the same culture they once experienced.

“It is important to create an atmosphere that best serves the students studying at the nearby schools, rather than going all about reminiscing because this shop is for the local students and residents as it once was [back in the 70s and the 80s],” said Sohn.

When the cafe prepared desk lamps for individuals and private rooms for group discussions in order to give the best ambience for academic work, Sohn spotted a new trend that he did not expect: it’s become a hot spot for sogaeting, which is when friends try to fix up their single friends.

“In every library, there is a nook or corner where some people go to hide from many eyes for a playful kiss,” said Sohn, adding that he had expected couples would come as they can study while having some chitchat.

“So I tried to make that space [by using bookshelves] and provide privacy to add more excitement over coming to this place, but I did not see that this place will become a hot place for sogaeting.”

Such changes in cafe culture have even been studied by academics.

“It is necessary to aggregate how the coffee culture has developed [in Korea] as more attention falls on expansion of the related market,” said food and nutrition studies professor Lee Jung-hak of Ulsan College and author of “From Gabi to Caffe Latte.” Gabi is the first name coffee had in Korea.

“In places called dabang, it brings back memories for the middle-aged as they used to go there for coffee, while younger generations that are comfortable with going to franchise stores can feel more historical traces there.”

It’s not just coffee shops that were pushed out of business due to the change of tastes in college towns. Another landmark record shop near Hongik University was in danger of disappearing last year after the building owner decided to lease the store space to a franchise restaurant.

From left, Record Forum, a record shop that sells rare music, reopened inside cafe B. in Hongdae, northwestern Seoul, a month after it was forced to leave its original storefront nearby. A poster of the shop. Musicians perform on the rooftop of the shop’s new home last year to celebrate its reopening. [JoongAng Ilbo]

Pyo Jin-young, owner of Record Forum, which was established in 1995, said he wasn’t too surprised to get the eviction notice as it happened frequently to small-size shops located on the first floor of many buildings in Hongdae.

“[Large companies], for example, offer to give 500 million won ($457,143) for using the entire space when a landlord gets 50 million each from three shops that are on the lease,” said Pyo, adding that landlords have to make the most profitable choice for them.

Pyo was able to open his store again within a month after the shutdown, as a businessman approached him and offered store space within his coffee shop.

While he contemplated whether he should take the offer or close down the store, he said fans of his shop urged him to decide to continue the operation. As he collects rare LPs or CDs imported from the third world rather than selling albums of K-pop stars, he established a base of loyal patrons who keep coming back to satiate their eclectic taste in music. They informed him that there was a buzz on the Internet about a franchise restaurant pushing away a small 15-year-old record shop.

“I didn’t know that people had relied on this record shop so much, nor it had any kind of historical meaning until people started questioning me whether it is true that the store is going to be closed,” said Pyo.

“To me, it was just work I have been doing always.”

After Pyo reopened the shop inside the cafe named B. and played music there, he learned his nonmainstream taste in music can be enjoyed by a wider range of people as the cafe started to see more customers coming in and complimenting the music. After receiving some affirmation from the patrons, he even developed another business idea that he would provide music tracks for other coffee shops for extra profit.

While these two landmarks in the northwestern region experienced shutdowns and comebacks, one old-fashioned cafe in northeastern Seoul has managed to survive since its opening in 1956.

Hakrim Dabang, a Dok Dabang-equivalent of another college town, Daehangno, near Sung Kyun Kwan University and others, has never stopped catering to its customers.

Lee Chung-ryeol, the current owner of the cafe, says that his continuous efforts to change the content the shop offers while keeping the “hardware” were the key for such a good run.

“Of course, it is important to keep the facade of the cafe to continue its name as a nostalgic place but the taste inside should be up-to-date,” he said, adding that the food and drinks served there have evolved to satisfy modern tastes. “If nothing changes and everything stays still, it will be so hard to continue operation [for any business].”

Its long history has earned the cafe consideration as a future cultural heritage site by the Seoul Metropolitan Government, which is a place that could become a valuable cultural asset worth preserving.

“It is important that a place that has kept traces of humans for a long period of time is preserved and I feel responsible to do so,” said Lee. “Individuals, like myself, should continue what they can do, such as continue running the places, but society should also agree more on keeping [landmarks] and put more effort into doing so.”

After a consideration process, the city government will decide as early as August whether the cafe should be designated as a future cultural heritage site.

“Although it is a commercial store, if it has brought enough people there, it is worth preserving as a cultural heritage,” said Kim Su-jung of Seoul Metropolitan Government.


Guidelines at Dok Dabang Rules for customers to follow

1) No outside food allowed.

3) One order per person.

4) Too many public displays of affection can bother others.

1) Only use premium-level coffee beans.

3) Fresh creams are made on spot.

4) Use dry fresh fruit to add decorations on food.