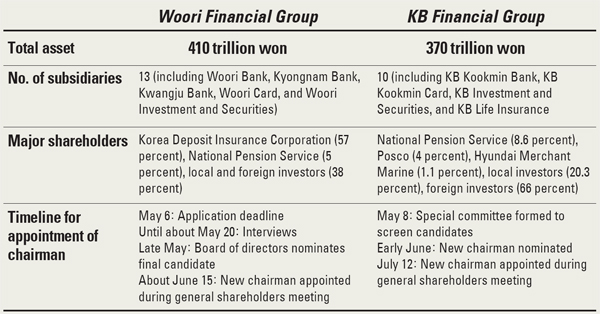 Former and current Woori Bank presidents submitted documents yesterday among others to try out for the chairman position of Woori Financial Group, according to sources in the financial industry.

Candidates include Lee Duk-hoon and Lee Chong-hwi, former Woori Bank presidents, and Lee Soon-woo, the current president whose term ends in March next year. Yesterday was the deadline for those interested in applying for the chairmanship position to submit necessary documents.

Former Chairman Lee Pal-seung stepped down last month amid pressure from the new Park Geun-hye administration, which has become interested in the group’s leadership since the government owns a majority stake.

Financial Services Commission Chairman Shin Je-yoon told reporters recently that the new chairman “should be someone with a philosophy that the institution should be sold in the market quickly.”

The previous government had tried to sell Woori Financial Group as part of privatization efforts, but it failed three times since no investor showed interest, in part due to gloomy economic conditions.

A high-level government official told the JoongAng Ilbo on Sunday that the government will rule out close associates to President Park Geun-hye as a candidate for the chairmanship at Woori and KB Financial Group, which is also seeking to fill its top spot.

“The foremost principle in appointing the chairmen of each financial group should be to avoid criticism that was prevalent in the previous government,” the senior official said.

“The new heads should be those appointed through a fair process,” the official said. “When appointing a financial group chairman, it’s important to see ability and experience, but it’s even more important to avoid any kind of criticism about the personnel appointments.”

The remark also comes after the government was criticized for selecting Hong Ky-tack, who was a member of the economic committee on Park’s transition team, to head KDB Financial Group last month.

The Korea Deposit Insurance Corporation owns a 57 percent share of Woori Financial, which gives the government authority over personnel affairs. As for KB Financial, the National Pension Service holds a 8.6 percent stake.

KB Financial Group is expected to form a special committee as early as tomorrow that includes nine outside directors to screen nominees to succeed current Chairman Euh Yoon-dae, who announced last week that he will not seek a second term. His current term ends in July.

The committee is expected to nominate a new chairman early next month. According to insiders, some of the potential nominees include Lim Young-rok, president of KB Financial, and Min Byung-duk, president of KB Kookmin Bank.

Kim Kwang-doo, head of Park’s think tank National Future Research Institute, told the JoongAng Ilbo over the phone that he has “no intentions of running for KB Financial chairman.”

Kim was considered a potential candidate for both Woori and KB.

Those who have not applied for the Woori chairmanship could try for the chairman position at KB Financial.

“The government hasn’t mentioned anything [about the new KB chairman],” said Lee Kyung-jae, head of the board of directors at KB Financial. “Once we form a special committee, the outside directors will independently seek a person suitable for the position.”