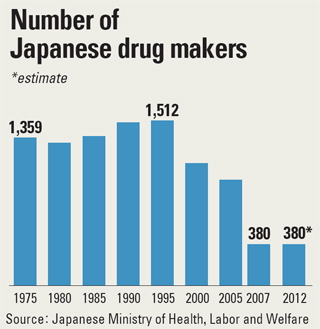 For years, the Korean pharmaceutical industry churned out generics, and with them, sufficient profit to sustain the businesses and keep investors happy. But that model was upended last year when the Ministry of Health and Welfare lowered the prices of 6,506 drugs by 14 percent to cut spending on National Health Insurance. The Park Geun-hye government’s plans for a further 10 percent cut in prices of especially popular drugs has industry observers even more worried as revenue falls.

Expecting a bumpy road ahead, some companies have begun looking to make fundamental changes to their business strategies, and inspiration for such revisions may not be so far away.

In 2000, Japanese government introduced similar policies to cut overall spending on drugs to 20 percent of the insurance budget from the existing 30 percent. Though initially seen as a disaster for drug companies there, the Japanese pharmaceutical industry was forced to undergo major restructuring to remain in business as revenue fell dramatically.

Small and medium drug companies collapsed first, as they paid little attention to developing new medication and simply sold existing drugs. Other firms turned to mergers and acquisitions in the quest for survival.

Daiichi Sankyo, born from the merger of Daiichi Pharmaceutical and Sankyo Pharmaceutical in 2005, is regarded as one of the most successful cases. Together, the nearly 100-year-old companies now constitute Japan’s No. 3 drug maker and are well known for their two products Mevalotin and Olmesartan.

In the 1960s and 1970s, Japanese drug companies fully relied on importing new medicine from the United States and Europe. They began to perceive a need to develop new medication after materials patent rights were introduced worldwide in 1975, but the policy revisions in 2000 kicked changes into high gear.

Developing a new medicine can require at least 1 trillion won ($914 million) in investment, and M&A deals provided Japanese firms with the needed funds. The number of drug companies in Japan is now about 380, down from as many as 1,500 in 1995.

At Daiichi Sankyo, the merger sped up research and development for new medications. Last year alone, the company poured 2.4 trillion won into research, or 20 percent of its overall revenue.

Now, with worldwide revenue of $10.9 billion last year, Daiichi Sankyo has become a model for others.

“Daiichi Sankyo suggests a direction for Korean drug companies, which are way too uncompetitive compared to the country’s IT, automobile and shipbuilding companies,” said Kim Dae-jung, CEO of Daiichi Sankyo Korea.

Though three of the world’s 30 top clinical testing facilities are located in Korea at Seoul National University Hospital, Samsung Medical Center and Asan Medical Center, the country’s pharmaceutical companies have yet to capitalize on this advantage. The key reason, according to some with experience in the Japanese market, is revenue.

“Among Korea’s 200 or so drug manufacturers, none raises 1 trillion won in revenue,” said Koichi Akahane, chief at Daiichi Sankyo’s research and development department. “The current structure makes it difficult to conduct even large-scale clinical testing to develop new medicines.”

Local drug manufacturers have managed to maintain double-digit growth in operating profit by producing generic drugs after purchasing licenses from overseas manufacturers, but since the new government price regulations have come into force, their revenues have dropped significantly and operating profits halved.

The way forward, according to Akahane, is to look toward innovation. “Korean drug makers can only grow when they enter overseas markets by seeking M&A deals with foreign drug makers and when they have blockbuster products that raise 1 trillion won in revenue.”